I’m making good progress with my gluteus issue. I don’t want to speak too soon, but it has been feeling a lot better. The physio appointment helped, and we think we now know the cause of the problem. As I said, I don’t want to go into too much detail until I’m sure the issue has been correctly identified and I’m truly on the way to recovery.

Once again, please consider donating to the Big Red Run charity page, raising funds for juvenile diabetes research. If I don’t raise at least $1000, I won’t be allowed to compete. Click on the following link to help me out.

Another photo here from Germany on a snowy day. This is not a black and white photo, even though it looks like it. Almost every day was like this – I got used to seeing the world in shades of grey during this time. There just didn’t seem to be any colours. 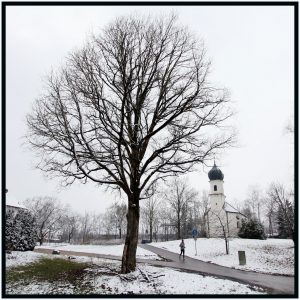 I tried just about every treatment for this problem, before the right diagnosis was made. I had let my “core” muscles become weak and ineffective. These are the muscles which stabilize you when sitting, standing, walking, and running – they work all the time at a low intensity. Consequently, other muscles – ones designed for occasional but high intensity activity – were doing the job of the core muscles. These other muscles, therefore, were fatiguing, resulting in the aching feeling I had. The best way to descibe it is to imagine the ache you get in your stomach muscles when you reach your limit of sit-ups. The muscles are screaming out for you to stop, because they are fatigued. This was what was happening in the muscles around my right buttock – the gluteus maximus and others.

After being put on a program of core stengthening exercises, my problem rapidly evaporated. But since I’ve been on my world run, I’ve neglected my core strength, and the problem has resurfaced. I am now physiologically “unstable” while running, and various muscles are starting to take on roles they shouldn’t have to perform. So I have begun my regime of core strengthening again, and I’ve already felt the benefit. After a painful start to the day, I finished feeling much more balanced and virtually without that ache I had yesterday with every step. I didn’t think it would improve that quickly.

So that’s the wrap-up on that issue. I’ll keep readers informed of progress. As for today’s run, I took it slow and easy, mixing some faster than normal running with short walks between. It was almost a fartlek session. That was until the heat really kicked in during the afternoon. It was pretty extreme (my guess is around 35 C in the shade, and about 45 C for me in the direct sunshine on the tarmac). I was pleased to finish and have a cold drink.