I’m still not ready to claim I’m on my way to a full recovery from my gluteus problem. It felt good this morning, but yesterday it was a real problem after showing improvement in the days before that. It seems I take three steps forward and two steps back. I have a 50+ km day planned for next Friday, so I want to get it back to normal before then. Sorry to be mentioning it so often, but I’m unable to do a lot of running at the moment, so it’s the “topic of the day”.

Like the last post, here’s a photo from Germany when I was running in the snow in March of 2013. In this instance, you can just make out the cycle path on which I was running (you can see it about 20 metres in front of me). This made the running much more enjoyable, even if it was covered in a thin layer of snow and resulted in my feet being wet and cold all day long. 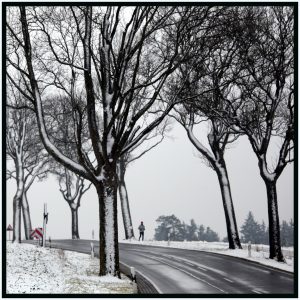 Following my mention yesterday of the cyclists who have circumnavigated the earth according to the rules, I learned that a race based on these rules concluded earlier this week. The winner was a guy called Mike Hall, who completed his lap of the world in 92 days – an incredible average of about 320 km per day – which is about six times what I’m averaging on foot per day. This smashed the previous cycling world record, which had already been broken several times in recent years.