As mentioned previously, I’ve backed off the running a little in favour of cycling during the second half of this week. But that doesn’t mean I’m not running. In fact, it’s a joy to run in a different location for a change, especially one as pleasant as the town of Mudgee.

Thanks to Geoff Davis for adding me to the Wikipedia list of those who’ve run across Australia. Perhaps he might even be able to add Tony Mangan and Kevin Carr next, to make the list even more complete.

Here’s a very atmospheric photo of me running on a cold and frosty morning in the south of France. The Pyrenees (not visible) are off to my right. 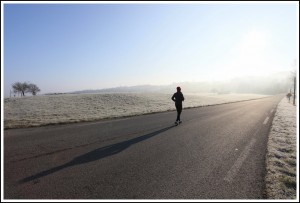 We ventured into downtown Quartzite for dinner, settling for Silly Al’s. This was pretty much forced upon us, as the recommended joint was closing up at 8 pm when we arrived. As it turned out, it was for the best. The meal of Silly Al’s Homemade Texas Chilli and a 20 inch pizza (that’s a half metre in diameter – HUGE) were just what the doctor ordered. This was complemented nicely by the carafe of merlot and the local rock’n’roll band playing old favourites. And they were OLD favourites. The crowd was predominantly what are known here as Snowbirds – older people escaping the northern winter by coming to Arizona and staying a few months in RVs or trailer homes. The Snowbirds were revelling in the music, and we enjoyed watching them enjoy themselves. In fact, we were the youngest table in the joint. The girls loved that little fact.

And this morning we learned that Wyatt Earp was the sheriff of Quartzite for a while. That was before all the RVs, trailers, and other temporary accommodation moved in. He wouldn’t know the place now.