I’m back in Sydney now, so it’s back to the same old running courses. A week of running on King Island and in Launceston was a welcome psychological break. But there’s more to come. The second half of next week is the Tour de Bois mini tour, which will result in me doing several days of running in Mudgee (as well as the cycling, of course). And then a week and a half after that I’m off on a work trip to the US and Europe for ten days. It will be my first time in Europe since the world run in 2013. So, I’ll certainly be having a decent break from my usual running haunts over March and April.

I reported that my time for the King Island of 2 hours 30 minutes was an average of 4:41 per km. Well, the race is called the Imperial 20 because it’s actually 20 miles in distance. That means I averaged spot on 7:30 per mile.

There have been a few similar photos to this published already, though this one is slightly different and never before seen on this blog. For those unfamiliar with the location, this is the precise spot in Monument Valley where Forrest Gump decided to stop running and go home. He had an entourage following him. As you can see, I was on my own on the road. 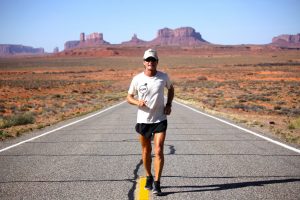