I’ve not long finished a 52 km run. It didn’t start well, with constant raining belting me as I ran along a very busy highway. But at the 17 km mark I turned off into the Royal National Park (the second oldest national park in the world, after Yosemite). The rain then stopped, and the traffic was almost non existent. It was a lovely run through the rainforest, followed by a very picturesque run along the coastal road south of Stanwell Park.

So, overall, I was pleased with the run. It wasn’t particularly fast on average, as I had to spend almost an hour on the phone on work calls. I walked while talking, just like I used to do during the world run. I didn’t mind, as it gave me a chance to rest. Consequently, I’m feeling pretty good now.

The valley you see behind me in this photo from the world run is of South Park County. The cartoon series gives the impression that South Park is a reasonable urban area. It’s not. It’s actually very sparsely populated, which suited me just fine. Here I was about a day and a half from Colorado Springs at the base of the Rockies. 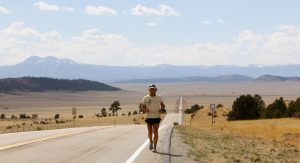 Sometimes we just make the wrong choice. That’s what happened to me today with my selection of clothing. I knew that a cold front had come through overnight, but I thought I’d be OK in a T-shirt. Nah!

The temperature was low, probably around 12 C, but it was the wind chill that got me. I was running into a gale-force headwind, and after two hours I was chilled to the bone. I had to get the girls to come by early and stop by the side of the road so that I could hop in the car and warm up. I sat there for nearly half an hour, gradually warming up, but the hardest part of the day was rustling up the motivation to get back out on the road.

Thankfully, however, the afternoon saw the wind start to drop and the temps increase. In the end I had a pretty good day, and felt quite strong. And I passed the milestone (no pun intended) of 4,000 miles as well.

So, that was my day, but what about last night? Well, we were staying at the First Interstate Inn in Alliance, and when the girls booked in, we were all invited to dinner by the manager, Arlene. We had a superb meal, cooked by Justin and Arlene, and we were joined by Colleen, Dale, and Susan. The wine flowed freely – almost as freely as the country hospitality. We could not be more appreciative of the kindness we experienced. And it was topped off this morning by a display of tap dancing by 82 year old Colleen. What a woman!!!

I also learned that the snake I encountered a couple of days ago was a rattler. If I’d been bitten, I definitely would have been rushed to hospital for treatment with anti-venom, and probably would have been laid up for several days.