I’m slowly getting back toward normal mileage, although this pelvic issue is taking its time. At least it’s not stopping me from running. Sitting is the biggest problem, so I’m currently typing this standing up. A lot of people recommend working at a computer standing up, though it’s a bit hard being on your feet all day long.

Tony Mangan has recommenced the Australian leg of his walk around the world. He stopped in Toowoomba and headed over “the ditch” to walk New Zealand. He restarted from Toowoomba yesterday. I’ve caught up with Tony several times during his recent stops in Sydney. Each time we’ve hit his favourite Irish bar in Sydney – Jimmy’s, which is just down the road from me. Tony, of course, ordered Guinness.

Speaking of Tony, here is a photo of four guys who have run around the world, taken at the Icarus Ultrafest in Florida in November, 2015. From the left is Kevin Carr, Tony, myself, and Jesper Olsen. There are only two others – Rosie Swale Pope wasn’t at the event, and Serge Girard was about to begin his world run, which he has now finished in new world record time of 434 days. 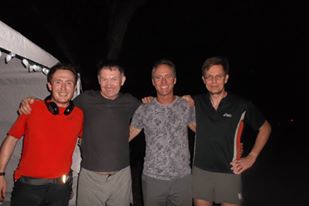