Still on the Tour de Bois until the weekend. That’s means fairly minimal running of around 5 km per day or less, but far more cycling than I normally do – which is zero outside of these tours.

The world run memories for today are from south-western Germany. As you will see from the videos and photos, it was snowing a lot at that time, making for cold running, especially for my feet.

It was another cold one today, but, as I always say, better cold than hot when it comes to running.

The early part of the day was again along the Rhine, but by late morning I’d veered to the north, along a smaller river. This river – more like a creek – is the border between Germany and Switzerland. On this occasion, I was running for quite a while in Germany, while at the same time being only five metres from Switzerland. I also had the Black Forest on my left.

I would like to have made a bigger excursion into Switzerland, spending several days there. However, the cumbersome telecommunications system in Europe, where every country requires its own SIM card or you pay exorbitant roaming charges, has precluded me from anything more than a few kilometres at a time in Switzerland. I just wasn’t willing to go through the new SIM card routine again for the sake of a few days. Unfortunately, Switzerland has been the victim of this issue, as far as my run is concerned.

I forgot to mention, my tracker is operating normally again during the day, so you can watch my progress in real time. It didn’t work for a month while I was in France, thanks to phone company SFR.

While much of my day was on flat cycle paths, the last part entailed some vicious hills, with gradients of up to 15%. It was a nasty way to finish the day, but I’d rather get it out of the way now, instead of in the morning.

Tonight we’re in the south-eastern part of the Schwarzwald (Black Forest), and it is snowing steadily. It could make for some very pretty running tomorrow. We’re having some internet problems, so the photos may take a day.

It was back to a snow covered landscape today – surprisingly so, at this time of year. My Garmin registered a temperature of -3.7C this morning while I was running, and that was when it was being warmed by the palm of my hand. I suspect the real temperature was closer to -10C.

I generally don’t mind running in these conditions, but there was a slight headwind, which drove the light snow directly into my face. Each time a snow flake hit my eyes, it felt like a small pinprick in my eyeball.

I was stopped by a German policewoman, who told me it was too dangerous to run on that road during a snow fall. She spoke excellent English, and was very polite, pointing out there was a cycle path only about 50 metres away. I hadn’t seen it, as it was totally white, like the rest of the countryside.

Luckily, there were many different cycle paths along my route today, and I didn’t have to run on the road too much. On one occasion when I did, I found it was easier to “ski” down a hill, than to run. The road was smooth, and the snow reduced the friction to almost zero. I simply slid my feet along the side of the road, like cross-country skiers do. I reckon I was moving about twice my normal speed for a short while.

My feet were quite wet from an early stage, and in these conditions, they spent pretty much the whole day at around freezing point. When that happens, there’s no real deterrent to running through the snow. I regularly plodded through deep snow drifts, as I knew my feet couldn’t get any colder than there were.

I finished with a good total, and had quite an enjoyable day in retrospect, considering the conditions. We had trouble again with accommodation. The first choice was closed because it was a Monday. The second choice had recently ceased to be a hotel. We finally found a very pleasant abode for the night – something that’s even more important when the snow is getting heavier outside. 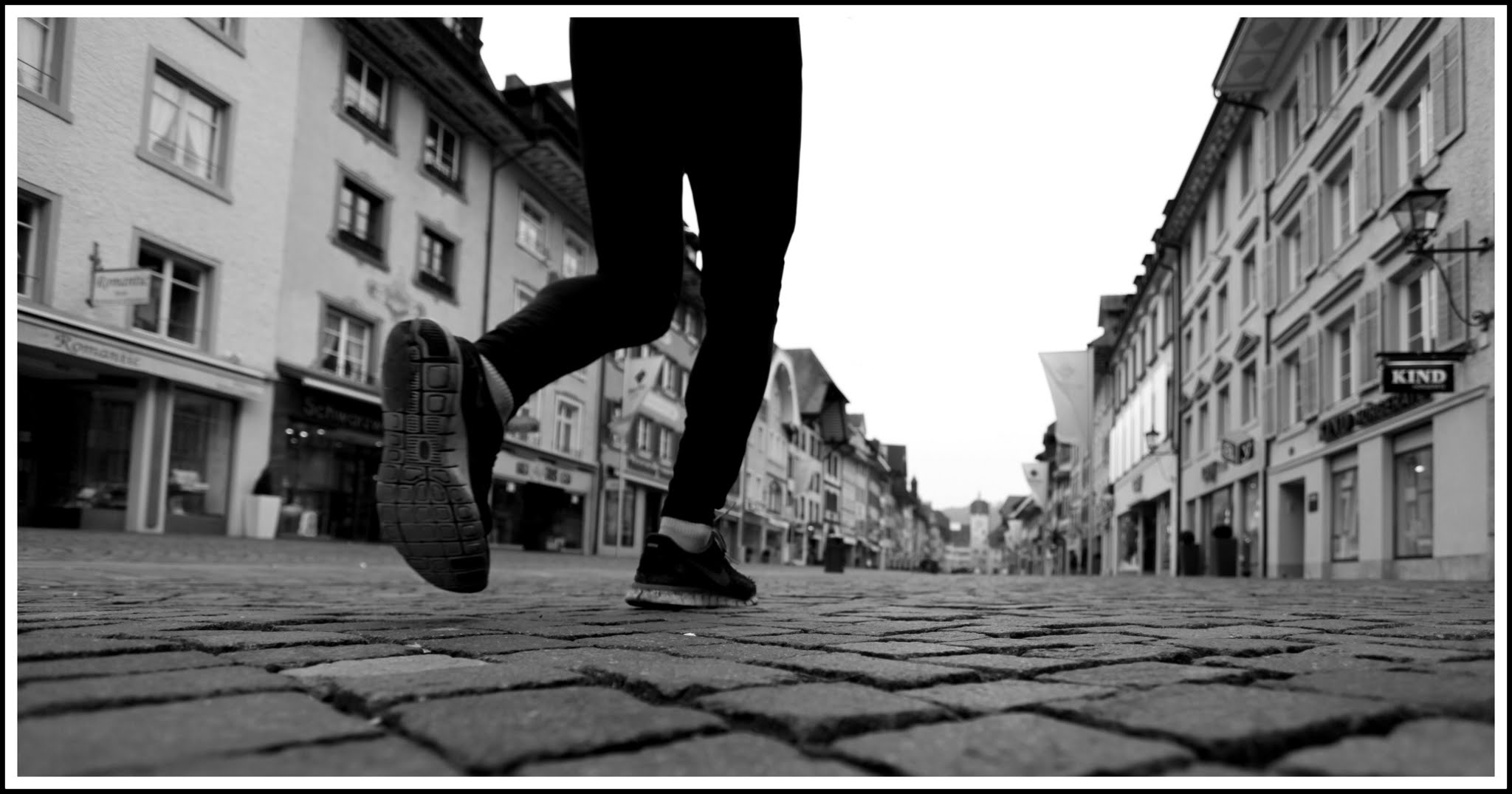 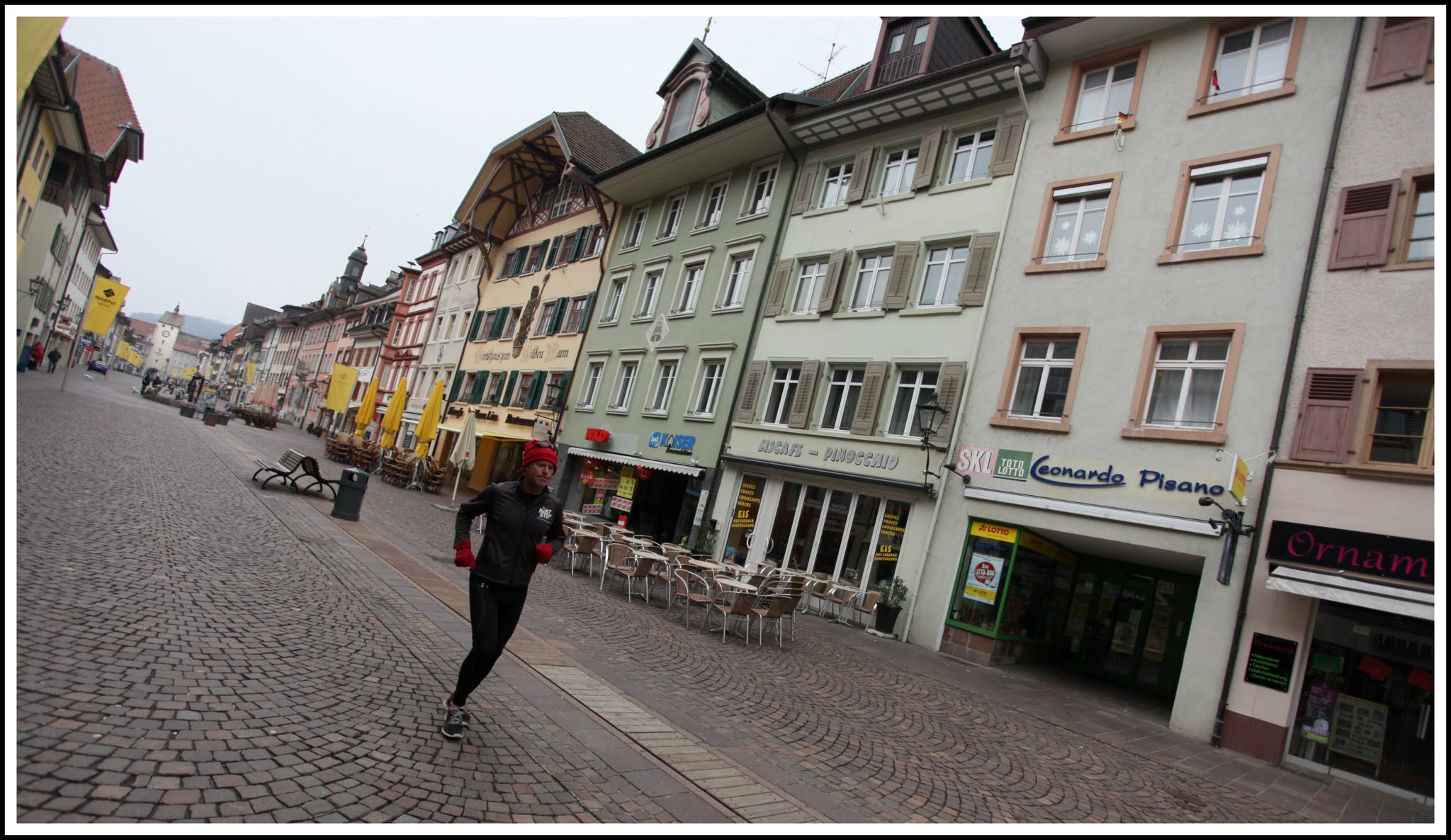 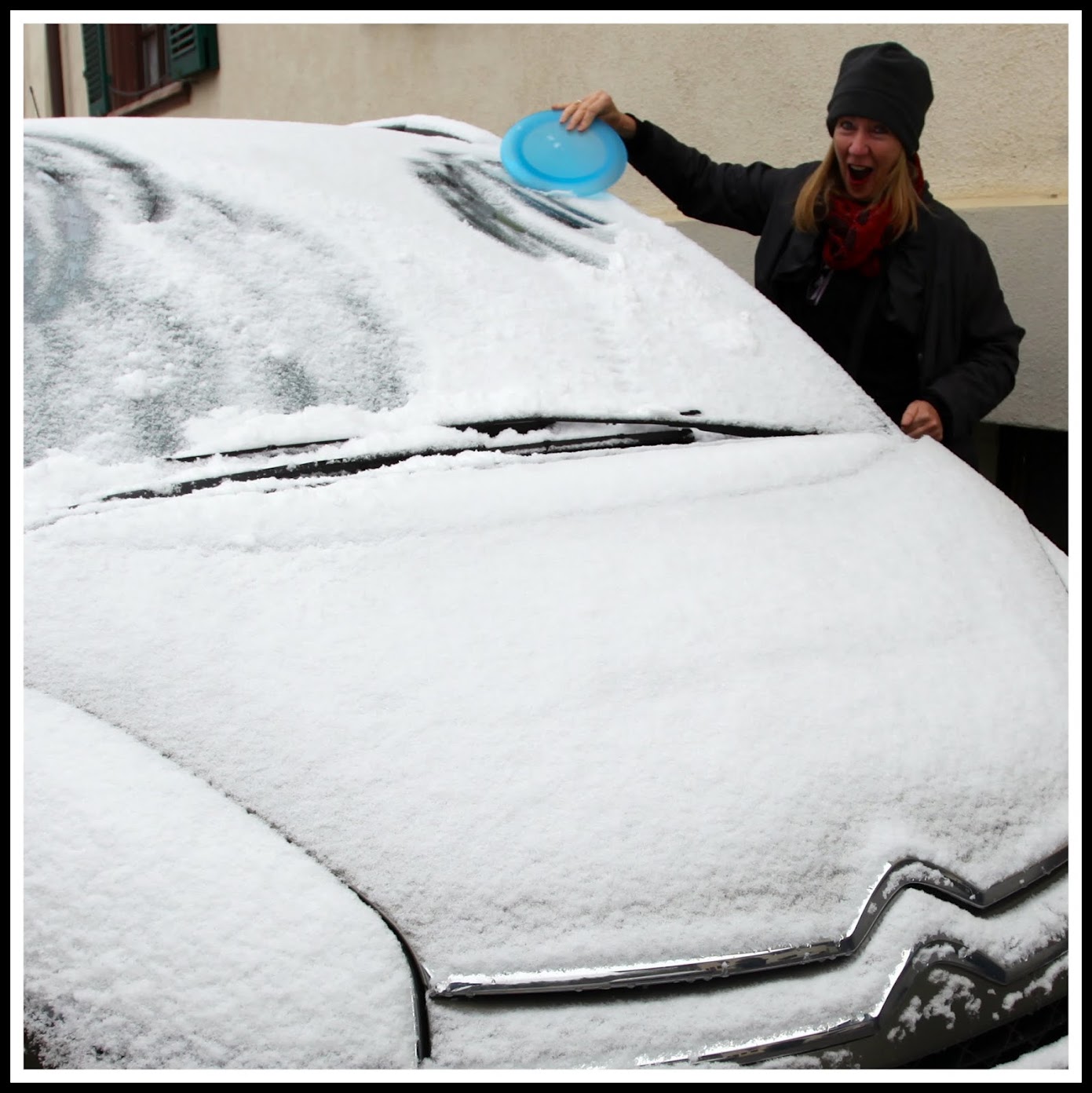 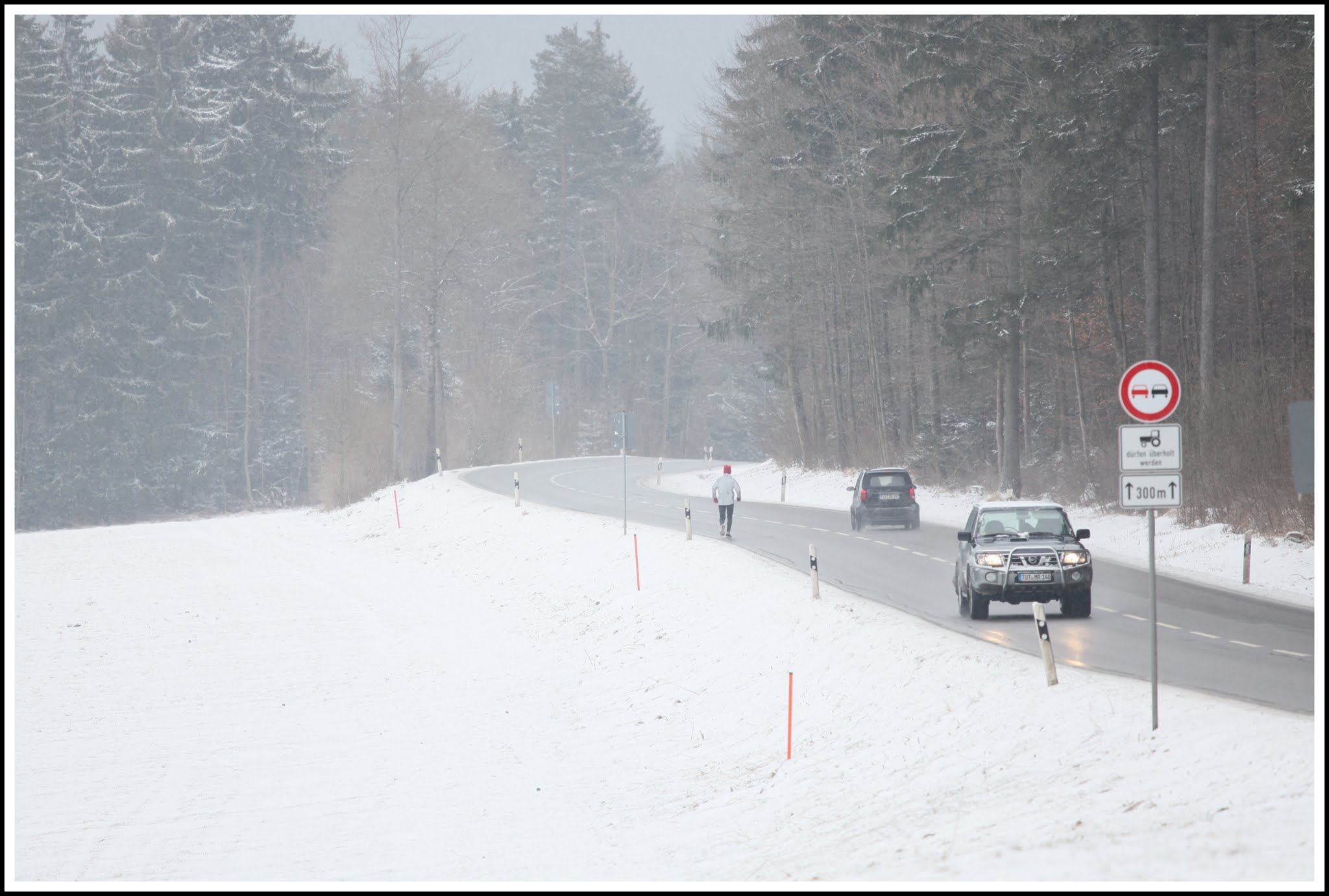 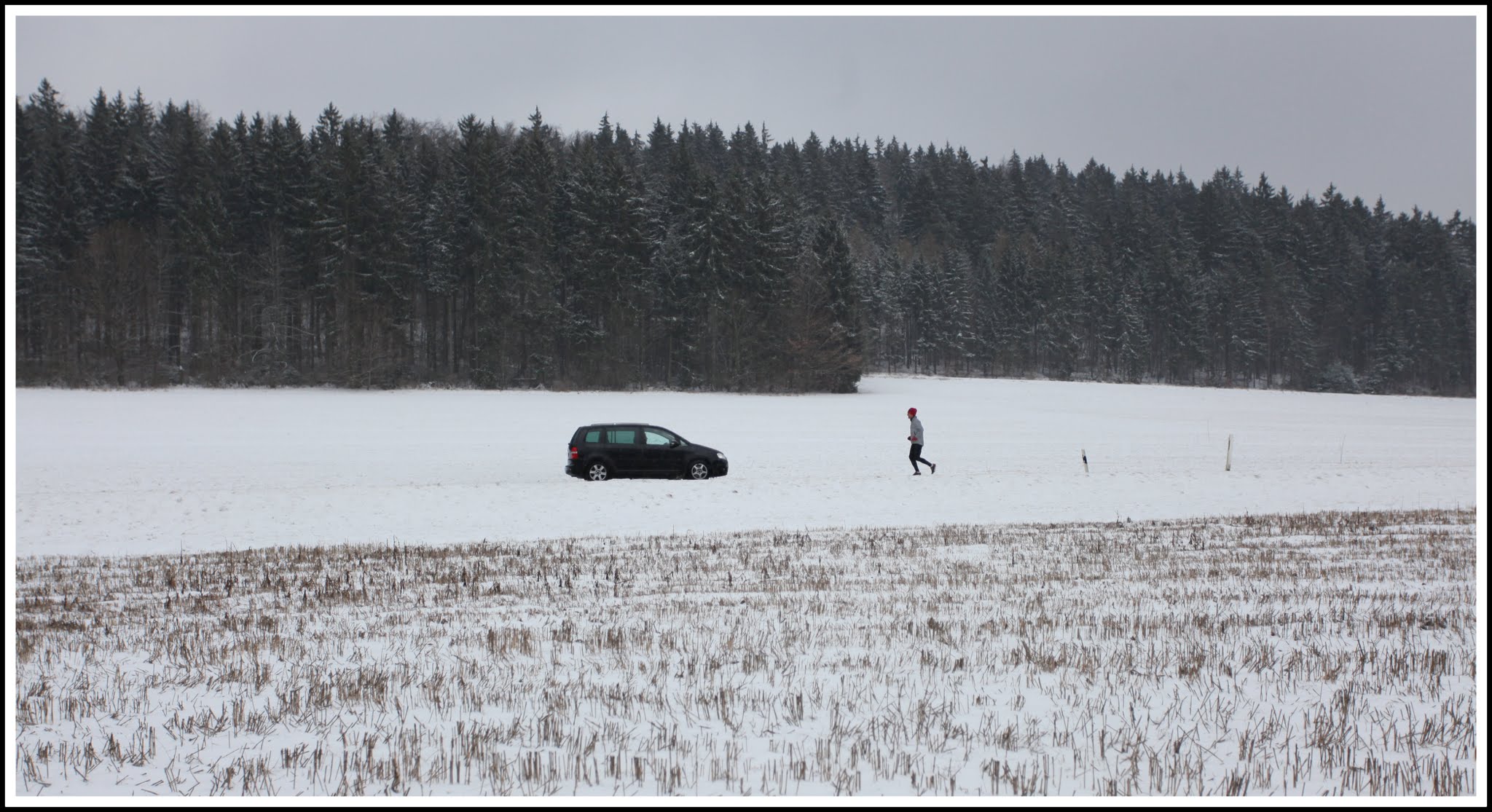