I finished the King Island Imperial 20 (32 km) in 2:37:09 this morning. That was roughly seven minutes slower than I ran three years ago. Unfortunately, I was impeded by shoe trouble.

At the start line, shortly before I was scheduled to go off (it’s a handicapped race, with people starting at different times), I discovered the sole of my left shoe was disintegrating, with half of it hanging off and flapping with every step I took. And they’re a brand new pair of Nike Fly Racers.

There wasn’t much I could do about it. I simply had to accept the reality and run the race with the sole of my shoe flapping with every step. It would often double under so the sole felt thicker on the outside and thinner on the other. Anyhow, I won’t blame it too much, but I’m sure it took a few minutes off my time. I now have a very sore point on the left side where my femur joins the pelvis.

I have no idea of my position, but I think it was about middle of the field on handicap, and I suspect about 5th or 6th fastest overall.

Now, on to memories of the world run. Today I have three videos for you, all from the Californian desert. There’s also three photos from the same region, and three from southern France. The French ones are easy to pick, as I am wearing long pants and a beanie. 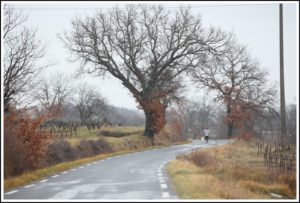 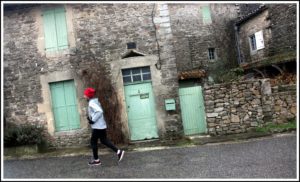 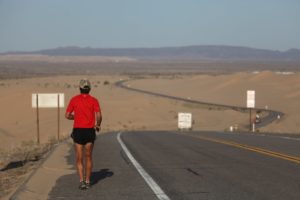