Just an easy 11 km run this morning, although I did make a spontaneous decision to stretch out over the final kilometre, covering it in 4:42. Once again, not fast, but it did feel easy.

After last week’s 140 km, this week will be lighter. That’s because I’m heading off today for the Tour de Bois annual mini tour. It will comprise a few days of cycling around the Mudgee region. I’ll still be reporting in, however.

The other day I was looking at Serge Girard’s web site and clicked on a link about crossings of Australia by foot. Up came a Wikipedia page titled “List of people who have run across Australia“. Despite the site listing people who have run across the continent between 1973 and 2015, I was not on the list. Neither was Tony Mangan or Kevin Carr. I know Wikipedia is a site on which individuals from the public do the updating and editing. I assume those who are on the list have friends who are familiar with the Wikipedia process and have added them to the list. But, if no-one bothers to add you, you don’t make it on to that list. Not that it matters to me, but if anyone out there is au fait with adding things to Wikipedia, feel free to add me. It requires some stats, which are: 97 days from June 10 to Sept 13, 2013, covering 5,000 km. This is the site: https://en.wikipedia.org/wiki/List_of_people_who_have_run_across_Australia#

Here’s another photo from the world run with a difference. This is me, having fallen asleep while writing my daily post-run blog. I guess I must have been particularly tired that day. 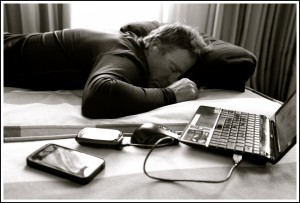 In recent days there has been nothing to eat along the way, so I’ve just had a banana that I take with me, and then eat when I finish. I’ve found it to be better than the daily burger I was having for lunch around LA. Today, however, I had my first burrito for lunch. A small shop was selling burritos in the town of Ripley, so I had one with beans and enjoyed it immensely. I just might make it a habit.

PS I have subtracted 60 metres from the Garmin data, due to me missing a turn and backtracking. I know it’s not much, but I’d rather be precise and not be credited with any distance that is not strictly “by the rules”.

PPS At this stage, we are having internet problems. I am doing all this on the hotel’s French keyboard. There may be no photos or Garmin link until tomorrow. The tracker will not update either.