I was very pleased with my race yesterday. It was hot and humid so I decided to run just the marathon race and not continue to the 50 km mark on my own. This worked out well, because an interview was scheduled immediately after the finish for the winner of the marathon. As it turned out, I won the race, so it would have been rude to keep running and ignore the plans of the organisers.

My time was 3:27:50. As most runners know, this is not a fast winning time for a marathon. However, it was a marathon more for novices than for experienced runners and pros. All the same, I was pleased to win the race, particularly as I ran a serious negative split. For those who aren’t familiar with that term, it means I ran the second half of the race faster than the first. This was the first time I’d ever negative split a marathon. The two halves were 1:46:20 and 1:41:30. I also ran the final kilometre in 3:55.

Although the time was far from my personal best of 2:49:14, it was only 12 minutes slower than my first marathon on 1983. It was also the easiest marathon race I’ve ever done, and I basically accelerated from start to finish. I felt great throughout, despite the 26 C heat and humidity (which was very unseasonal for this time of year). Thanks go to Kate Day and her friend Matt, who helped provide me with drinks during the race.

The other really pleasing thing was that I ran well despite being quite sore before the start, due to the rugby training I’d attended just 36 hours earlier. The sprinting, sidestepping, semi-body contact, and landing on the ground left me concerned for how I’d run in the race. It did take me about half the race before the soreness in my legs abated, but I hardly felt it after halfway. Today I feel pretty good and I’m no more sore than I was yesterday morning. I’ll now be taking it easy as I recover ahead of next Saturday’s rugby match – my first football game in a third of a century.

Below is a photo of Carmel and me in the German snow during my run around the world. These were the conditions I had to contend with on a daily basis. But, as I always say, it was better running in the snow than in 60 C temperatures. 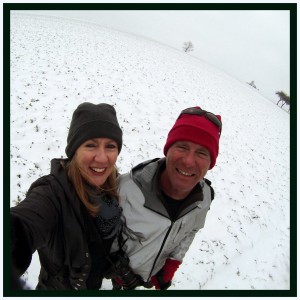 I was determined to see the Rocky Mountain National Park, and this required a big day of climbing up to the town of Estes Park. As I’ve mentioned before, my legs enjoy the uphill more than the downhill. Tomorrow is all downhill, so I’m not really looking forward to that.

The scenery up here was worth the effort – classic Rockies. It was dedicated as a national park by Teddy Roosevelt about a hundred years ago.

Speaking of Roosevelt, we had dinner last night in Boulder at the hotel he stayed at when he came to these parts for the dedication ceremony. We met up with my friends, Walt and Bob from NREL, and another Bob, who is a friend of our friend, Fi. It was a great dinner, outside on the corner on a very mild Boulder evening. Thanks again to the latter Bob for picking up the tab – it was very much appreciated.

Finally, happy birthday to anyone turning six years old today (May 2 in Australia), especially if their name is Ty.

PS I have added 840 metres to the Garmin file, as I forgot to turn my watch back on after a stop. Measurement was easy, as the gap was between two known roads.

Another day where the high was 36 C. It’s hard to believe that I experienced a full month where the temperature barely ever made it above freezing, and then, within two weeks, we’re having a sustained heatwave here in the Balkans.

The day was fairly uneventful, with relatively quiet roads the order. The road I was running on paralleled the freeway for most of the day.

We didn’t realise that May 1 is a public holiday here in Serbia. Most shops are shut, including restaurants, which has made it difficult to find dinner tonight. The receptionist at the hotel made a call, and we have something lined up, but must get there soon, before it closes.

Two months ago, I started to develop a bit of a heel spur. This is completely different to the problem I had in January, which was easily cured with some heel inserts. This spur is on the other foot – the right one – and was just a bit of an annoyance, sometimes bothering me toward the end of the day. Over the past few days, however, it has gotten worse. Today it hurt throughout. It’s not the sort of injury that will prevent me from running, but I will have to look into ways of managing it better. I want to enjoy each day, which is very difficult to do when there is background pain.