On this day in 2013 I was running in western Turkey, usually with Barry at the end of the day. Check out the blog posts, the video, and the photos. It was getting hot. In fact, within a month the conditions had gone from -10C to +30C.

A bit hillier, a bit hotter, and a bit busier, made for a tougher day. I’m looking forward to a quieter road tomorrow, and probably from here to Istanbul.

Last night we experienced real Bulgarian cuisine, as well as some of the local liquor. The waiter brought us out a glass of Bulgarian schnapps that he’d made. It was smooth enough going down, but the after taste was that of duplicating fluid from the old Gestetner machines.  One glass was enough for the four of us.

Tonight we’re staying in a fantastic hotel on a river – the Prikazkite, which means “fairy tale” in Bulgarian. It looks like it could be right out of a fairy tale. I’m looking forward to a few beers with Barry in the garden by the river. If he has enough, he may even do his pixie dance. He is now up to 40 km in total, after his run with me this afternoon.

There have been a lot of comments recently about Barry’s running fashion. He’s been getting a bit of flak from those close to him, about the “daggyness” of his apparel, and now he has dragged me into it, with reference to my 1970s Greg Anning style running shorts. I don’t think we’ve heard the end of this.

Today exhibited a contrast in weather conditions. It was hot and humid until early afternoon, but when a huge thunder and lightning storm hit, the temperature dropped to 13C, with me shivering in wet clothes.

The running was along the D100, a very good road for this sort of activity. It is getting busier, however, as I get closer to Istanbul. I passed through the towns of Babaeski and Luleburgaz, which were both much bigger than I expected, the latter having a population of well over 100,000.

A policeman stopped me during the storm to enquire why I was running in such unfavourable conditions. I just told him that I keep going, no matter what. He seemed to accept this.

Carmel, Debbie, and Barry had a lot of trouble again finding a hotel for the night. We weren’t expecting it to be like that. They were eventually successful, with a much better hotel than last night. In fact, last night’s accommodation was probably the worst we’ve had on the entire world run. The power went out twice, power cords weren’t long enough to reach sockets or they didn’t have plugs, the walls were cracking with pieces flaking off, the showers overflowed with murky water, and to top it off, there was a wedding reception that went to 4 am, with very loud music shaking the building until then. Luckily I can sleep through just about anything, but the others really suffered. They have been tired all day.

Due to the storm, there was some trouble finding me this afternoon, so Barry only ended up running 7 km. His total is now up to 71 km. Will he reach his century by Istanbul? 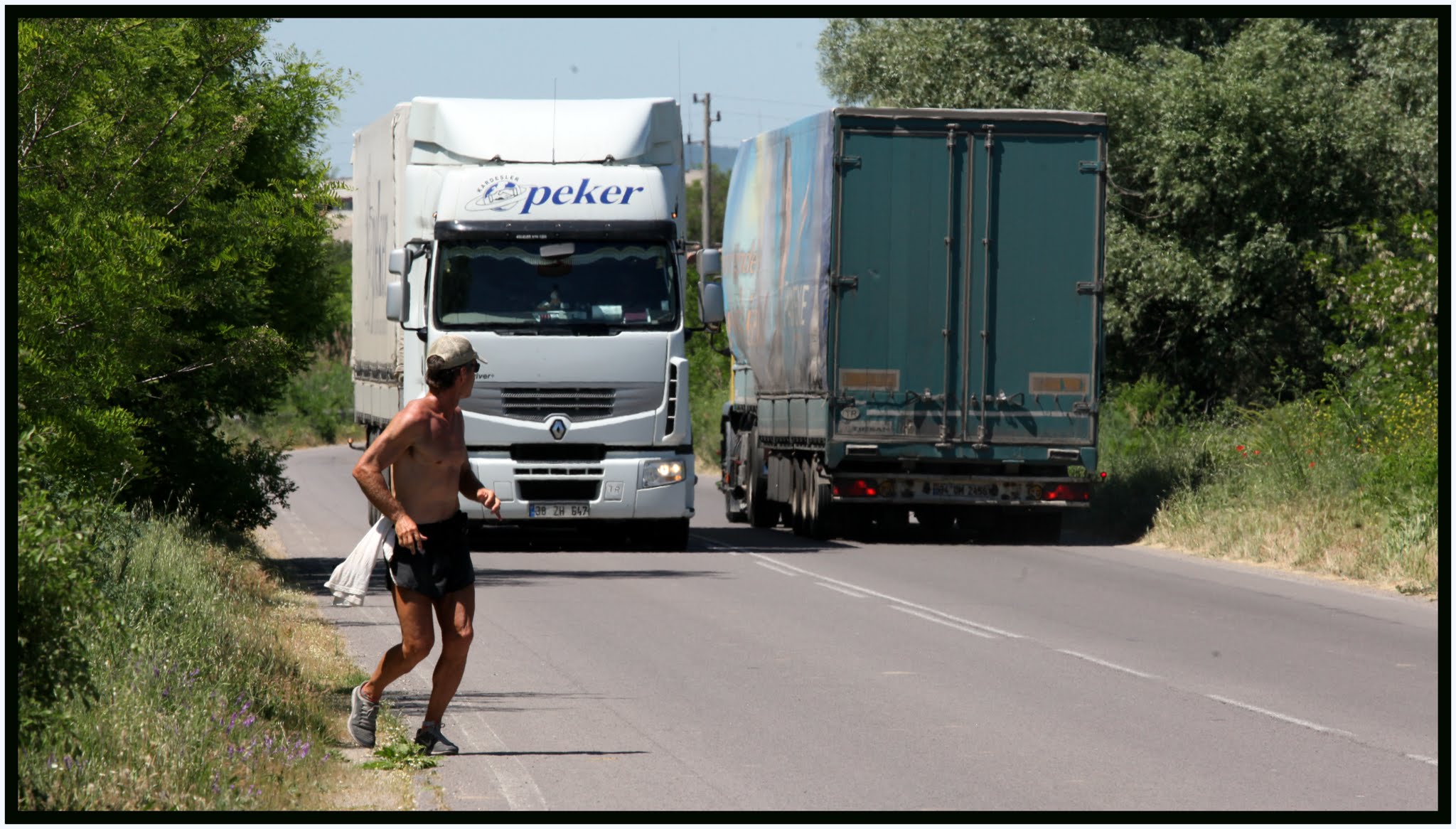 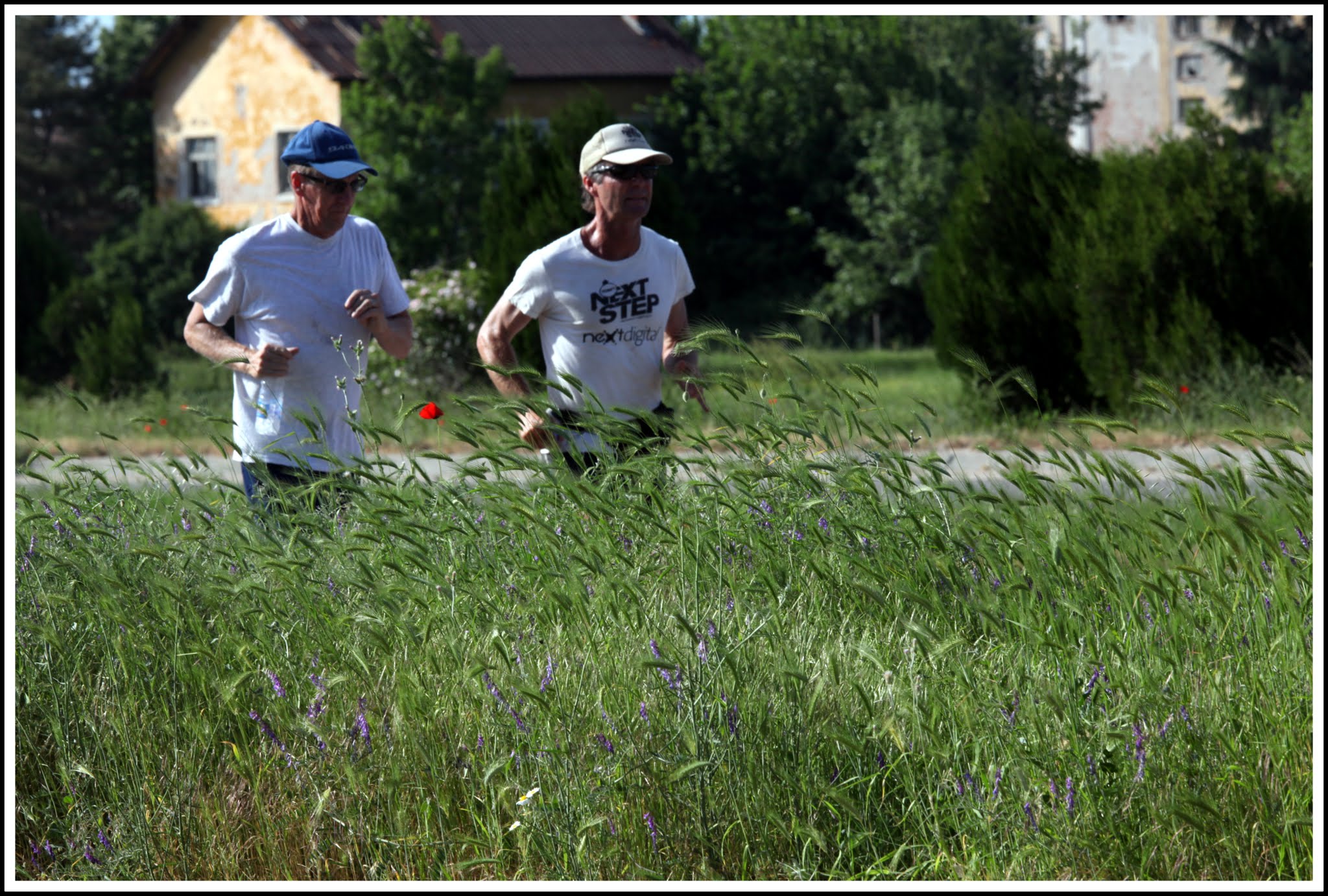 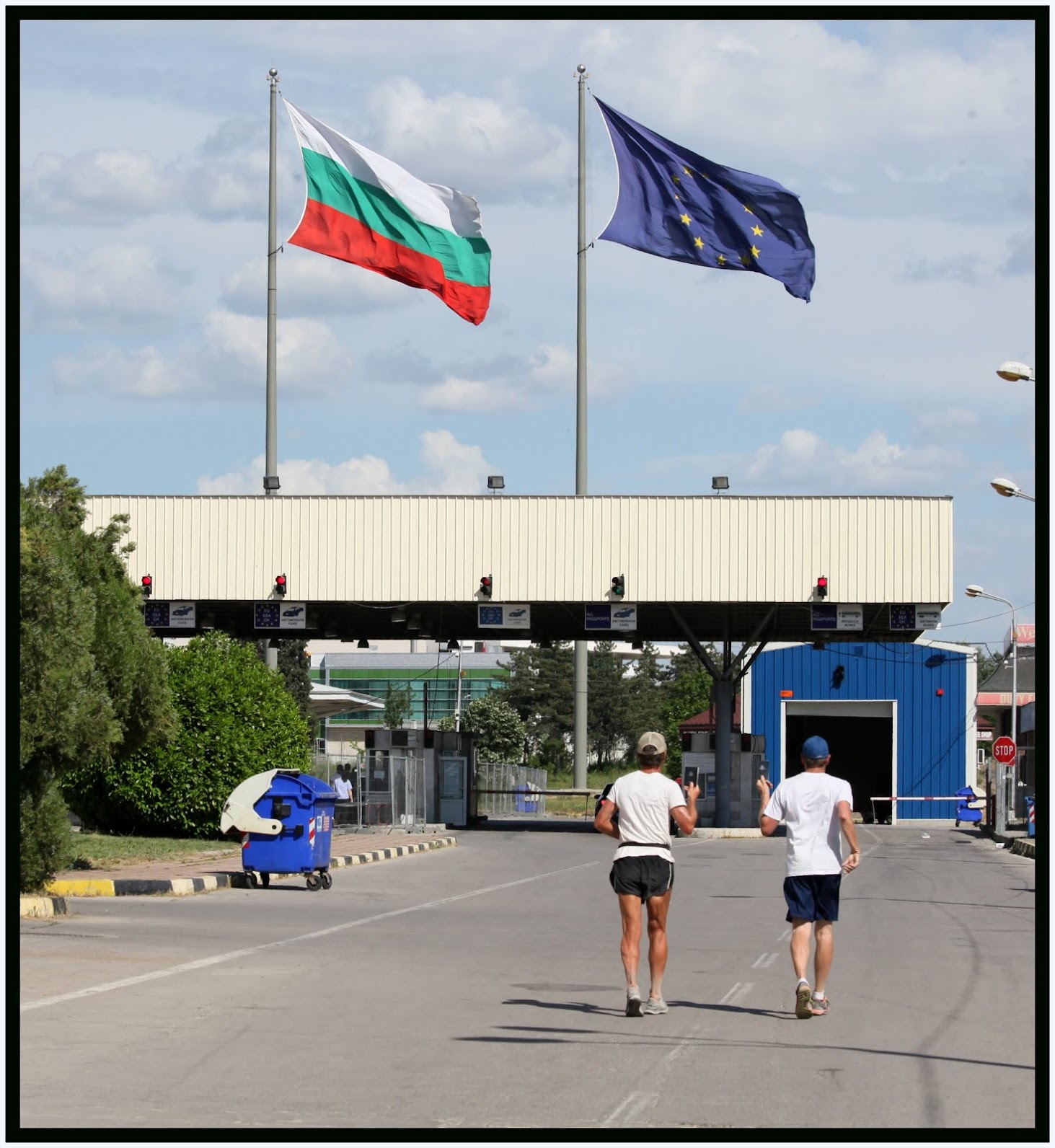 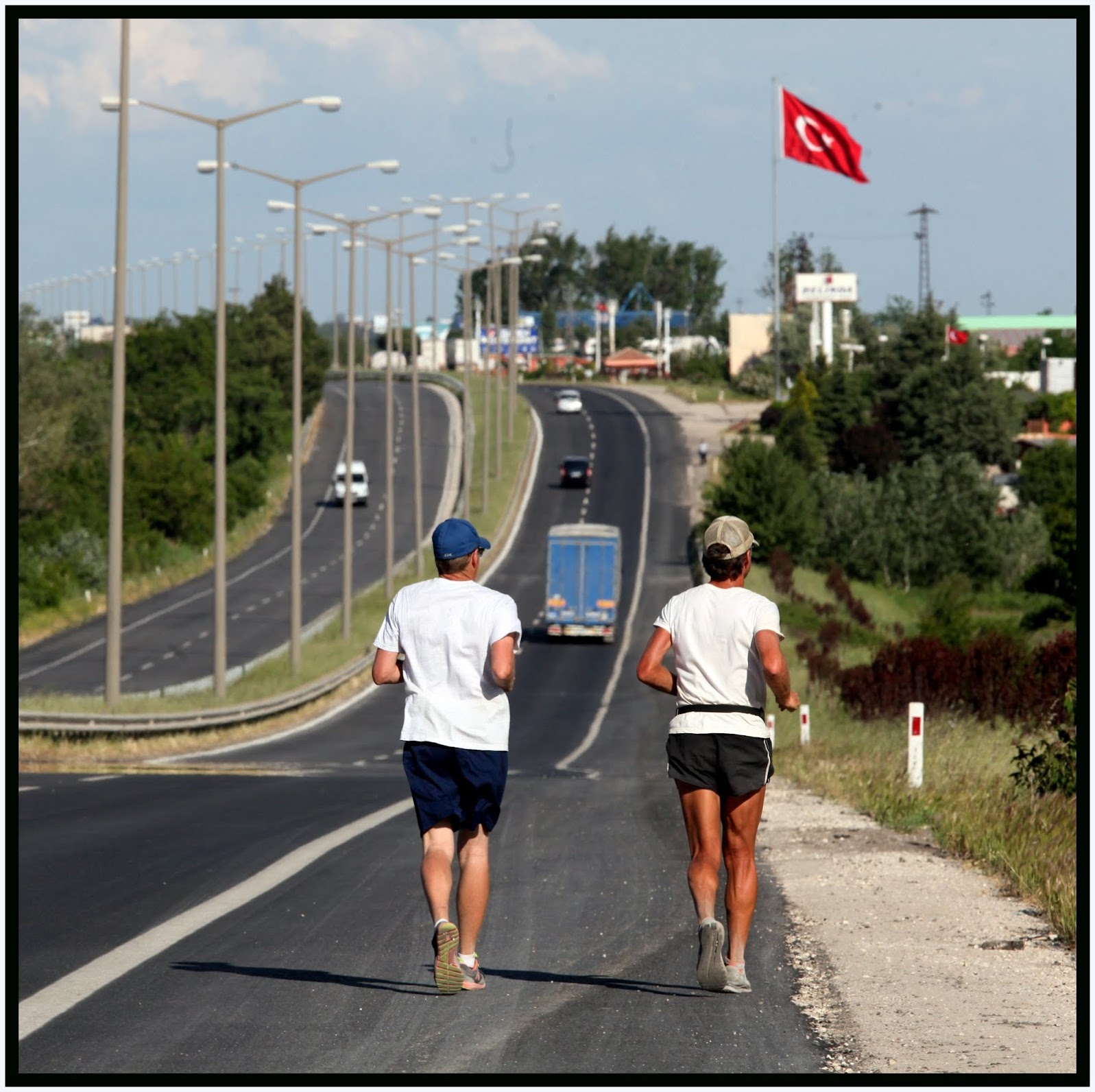 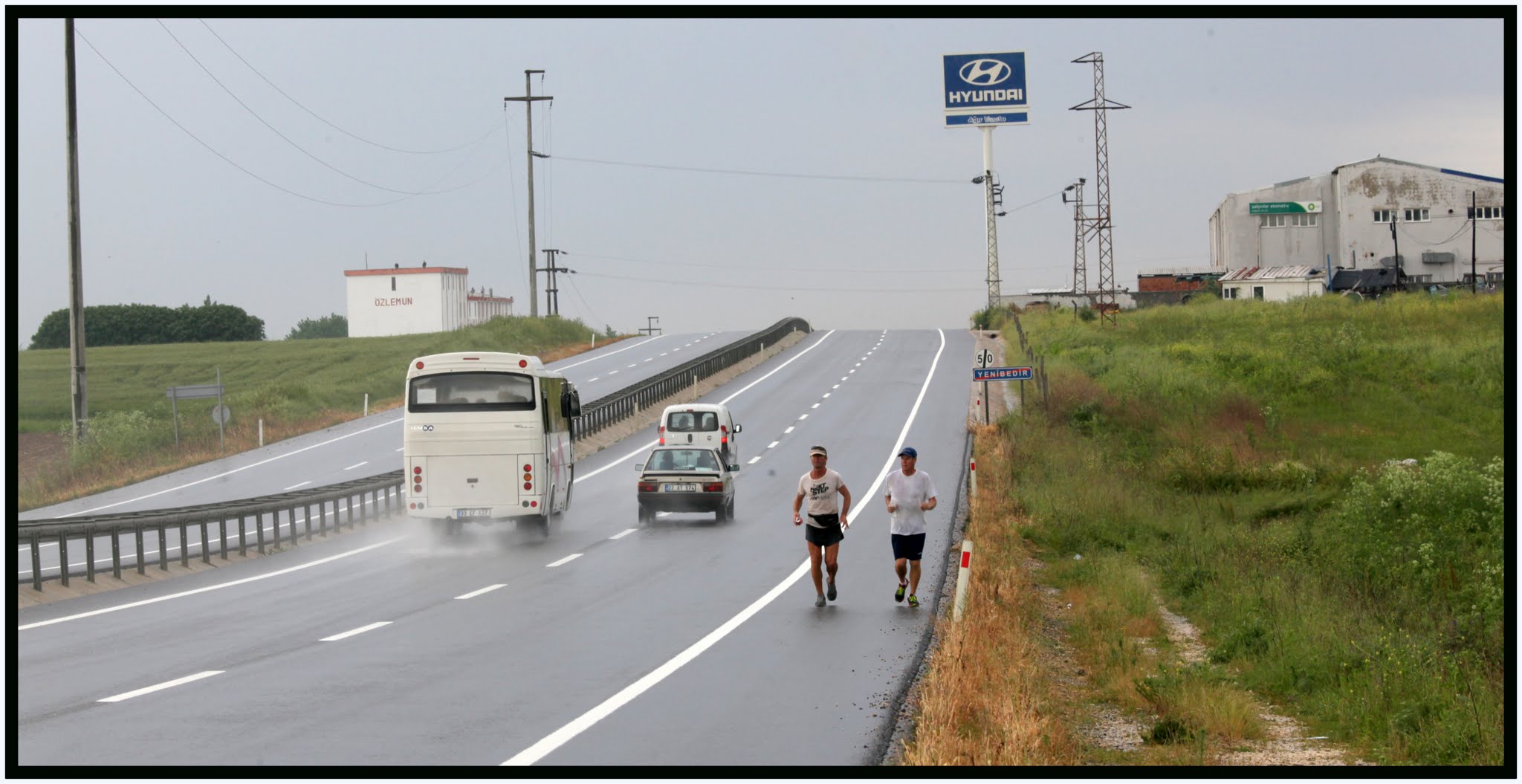