I’ve recently started something I’ve never done before – complementary leg strengthening exercises aimed at making me faster. My training has always consisted of simply running, but I’ve heard a lot of people recently extolling the virtues of plyometric exercises like skipping, bounding, and jumping.

Apparently Paula Radcliffe, world record holder in the marathon, improved her best time quite significantly after such a program. One thing she did was was what might be termed standing high jumps – you stand still and leap up on to something that’s at a higher level. I’ve just started these and was pretty happy that I could easily make the 27 inches (68 cm) of the arm of our lounge. Now I’m going to have to begin looking for something a bit higher – but something soft enough that I won’t injure myself if I don’t make it and “come a cropper”.

It might not sound too important to do exercises like this, and I used to think that myself. However, during my run around the world, the lack of anything other than long slow running resulted in me losing a lot of muscle mass in my legs. I realised this fact quite dramatically in West Virginia when I tried to run up some stairs to reach a pedestrian bridge across a highway. I was stunned to find I did not have enough strength in my legs to run up stairs – I had to walk. Seriously, I just could not do it.

One final Arizona photo today, before moving on to California. I’m sort of going backwards in time with these photos, as this one was taken as I crossed the Colorado River from California into Arizona. The river isn’t as majestic as it once was, because so much water is taken out of it upstream for irrigation. And a lot is held back by the Hoover Dam, which is some way upstream in the direction you’re looking in this photo. 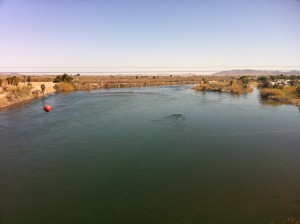