Although this calf tear is still very serious – I’m limping considerably, even when just walking – I am noticing improvements each day. I can both run and walk faster now than I could two days ago, and with less pain. However, it will still be a while before I can run unimpeded by the injury.

But it’s now a good time to decide what to concentrate on in the future in terms of running. I wanted to run the six day stage race in the Simpson Desert in late June, but the nearly $3,000 entry fee precludes that one, at least for this year. The logical focus is the Sutherland to Surf and City Surf again, although having succeeded last year in my aim to “run my age”, I won’t have the same enthusiasm for those events. In the absence of an alternative, though, I guess they’ll be it for the moment. But first, I have to get this calf right.

Today’s photo was taken as I entered Argentina during the world run. Actually, it wasn’t at the official border, which is way up high on the ridge of the Andes at nearly 4,000 metres in elevation. Both Chile and Argentina have their immigration checks some way down their respective sides of the Cristo Redentor Pass, which is where I was running in this photo. 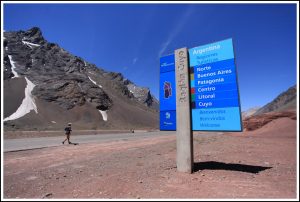 However, the landscape soon turned to a more monotonous visage of sandhills covered in grassy tussocks, with not a tree to be seen. The next 30 km was the toughest, making me wonder why I was doing this.