I’ve pulled up well after Saturday’s marathon. To be honest, I didn’t run it as hard as I could have, which makes a big difference to the ensuing levels of soreness. If I had run it as hard as possible, I reckon a sub 3 hour 15 min time would have been possible. But I also would have been a lot sorer. However, I really don’t think I’m capable of a sub 3 hour marathon these days, even if I did train specifically for it. Those days are gone.

I was helped on Saturday by Kate, who saved me a lot of time by bringing me drinks on the track. This meant I didn’t have to leave the track to go to the drinks table. Those who were following the world run may remember Kate ran a total of 87 km with me around the Cootamundra and Bundanoon regions, towards the end of the run. A friend of Kate’s, Matt, also helped with drinks on Saturday. Matt ran with me from Robertson to Albion Park during the world run.

And the manager of the drinks table on Saturday was The Hud. He ran further with me in a single day than anyone else during the world run – a whopping 60 km. And then he followed it up with 51 km the next day. He also ran with me on the very first day of the run from the Sydney Opera House, and he also ran with me in Hungary. Also there was Reefton Humblewood (a.k.a. Roderick Coy) who runs the Sutherland Relay for Life. He travelled with us for a few days through South Australia. So Saturday was a bit of a throwback to the my run around the world.

Anyhow, now I have to recover over the next few days and freshen up for my first game of rugby in a third of a century. I should be feeling pretty good by next Saturday. I think I’m going to be a lot more sore by this time next week.

Here’s another photo of me running in the snow in Germany. I look like I’m feeling the cold on this occasion. It was on quiet roads like this that I took to sliding my foot along the road on the frictionless snow, thereby “cross-country skiing” rather than running. At least that’s the way I thought of it. 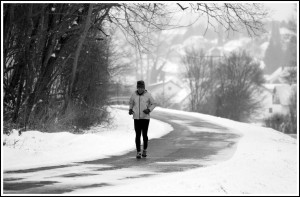 Now, you may have noticed the three Garmin data links above. You may also recall that twice in the past few weeks the Garmin data has refused to upload. This is a big issue for me, as I place great importance on a full and accurate documentation of every step of my run around the world. This Garmin data allows anyone to zoom in and see the fine detail of where I’ve run that day, even to the extent of seeing which side of the road I’m on. It also shows my speed at every moment of the day and my elevation. There’s no way anyone can cheat when they’re providing this level of documentation.

The terrain at the moment is very different from the flatness of the past two weeks. We are definitely in the mountains, with some snow still visible on the higher peaks. It’s the part of the mountain range which forms the border between Serbia and Bulgaria.