Today’s world run offering is from the countryside between Denver and Cheyenne (Wyoming). You can see from the photos why this region is referred to as Big Sky country.

As for my present day running, it’s going well. I even threw in a couple of faster sections this morning, including 400 metres in 75 secs and 200 metres in 35 secs – not fast by my younger standards, but I’m happy enough with those times as a 60 year old.

Once again, I took the scenic route today; this time so I could view historic old Fort Collins, as well as do some country running. I’m glad the rules are flexible and don’t require the most direct route between any two points, otherwise I’d miss too many things that are off to the side.

I started by running up into the first range of foothills of the Rockies, where I was told I’d have a great view of the town. It reminded me of the panorama from the lookout over Springfield in The Simpsons. There was no nuclear reactor in sight, however.

I then ran past the town’s huge stadium. It seemed out of proportion for the size of the town. I later saw a placard in a front yard, urging citizens to “Save Hughes Stadium”. I suspect the up-keep of such an enormous stadium is beyond the finances of the town.

From there I headed into the old part of town. As the name suggests, Fort Collins was established as a US Army fort to protect settlers. It was part of a system of fort towns that stretched along the eastern base of the Rockies in the 1800s. It doesn’t look like a fortified town anymore, but I’m sure its big university student population has it under siege a few times each year.

I finally hit a few trails that led me out of the town and on my way to Wellington to finish the day – back to some nice country running.

It was hot again, with temps around 30C. Yesterday was 31C.  These are far above average for this time of year. In fact, yesterday’s 31 was the hottest temperature ever recorded in Denver for early May. However, I haven’t been uncomfortable at all. The humidity is very low, thankfully.

Last night we went for dinner in Fort Collins, on a very balmy Friday evening. We found a very “buzzy” little bar that had 100 beers on tap, and a predominantly university crowd. As we sat outside, facing the street, we witnessed an amazing scene. A freight train, about a mile long and carrying molten sulphur, came up the middle of the leafy suburban street. I had thought the tracks were for a tram, but it was a full-blown train, not five metres from us. I’m not talking about train tracks crossing the road – these tracks were right up the middle of one of the main streets of this large town. The train had to blow its horn incessantly each time it passed a cross street, which was every hundred metres or so. Quite a sight – and sound!

However, I did see some things of interest. At my lunch stop – a bison ranch – I saw a new born Shetland foal. It was only about as high as my knees – the smallest horse I’ve ever see, by far.

I ended with a relatively short day, then we headed back to Denver by car. This is part of a planned logistics and rest break. We have several things to get organized, so I am not planning on being back on the road for a few days yet. I am not injured, tired, or burned out – in fact, my legs felt fantastic today and I would like to have run 20 km more. However, I am going to stick to the plan, as in past years I’ve pushed myself till something breaks – I can’t afford to do that on this run. So I’ll play it conservatively, especially as I’m so far ahead of schedule. I’m sure I’ll come up fresher than ever. 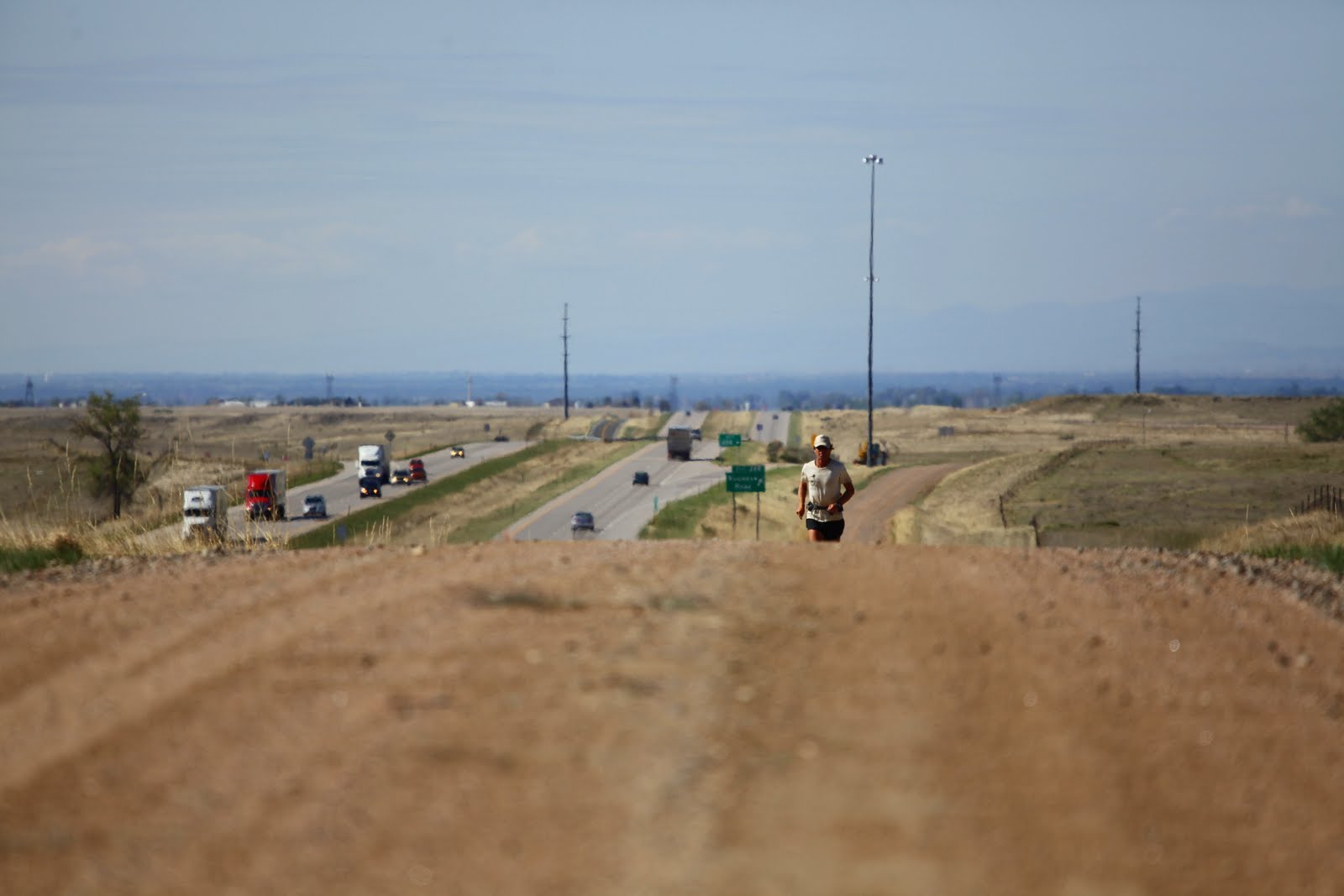