It looks like I’ll chalk up another 125 km this week. Not exactly a record for me, but my recent mileage has been solid. However, given the number of people I see out jogging and exercising in recent times, I reckon there’s a lot who actually are setting new mileage records for themselves.

Today’s offering from the world run includes a video as I crossed from Colorado to Wyoming, a photo from the same day, and a couple of photos from Bulgaria a year later, one of which includes Barry. He ran with me for part of every day from Sofia to Istanbul, notching up 100 km in total. This particular photo was as we approached the city of Pazardzhik. 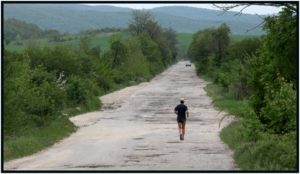