I leave for Florida in four days time, reasonably happy with my training leading into the 12 hour race I’ll be attempting. I’m not at all experienced in ultra marathon races, having competed in just two in my life. I placed ninth in the Run to the Sun on Maui in 2009, a 58 km race from sea level to the top of the 10,000 foot high Haleakala volcano, and more lately had to pull out of the Anzac Ultra at the 75 km mark due to my dodgy Achilles.

So I’m probably going to be the least experienced person in the race, although my run around the world has surely taught me a lot that will help me. Bear in mind, though, I never ran for 12 hours continuously during the world run, and my pace was a lot slower than what it will be in this race.

The event itself will involve roughly sixty world class participants in a very international field. All four runners who have completed a world run ratified by the World Runners Association will be at the event – Jesper Olsen, Tony Mangan, Kevin Carr, and myself. In fact, the reason we’re all there is because footage will be filmed for a documentary on the topic. In addition, other top international ultra runners will be racing – guys such as John Geesler. Tony Mangan informs me he and John had many royal battles in past races, such as those in which Tony set world records for 48 hours (these guys were running in excess of 400 km in two days).

With such a formidable field, it’s a bit daunting for me as such an inexperienced racer over these sort of distances (remember, I was never racing when I ran around the world – it was just me against myself). But I’ll do my best. The 12 hour race will take place on Saturday week. There will be more posts leading up to the event and I’ll do my best to post tweets during the race itself.

The world run photo for today is one I took as I was running through Monument Valley. What a great place to run!!! 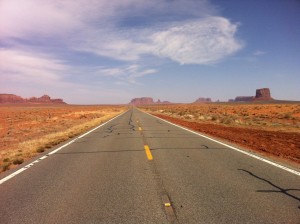 Sorry about the web site being down over the past day or so. It appears be fine now, thanks to the folks at Next Digital.

We had an interesting weekend down at Racecourse Beach, about 300 km south of Sydney. Carmel and I travelled down, along with Debbie and Barry (who accompanied us through Bulgaria and Turkey in May), and Kirsty and Richard (who ran with me from Goulburn to Marulan and beyond).

Besides the usual tennis and beach golf, the wildlife was compelling. Kangaroos, possums, ducks, and rainbow lorikeets were all eating pieces of apple from our hands. They were all wild, but you’d think they were from a farm or zoo. It was nice to see so many animals that were alive, in contrast to all the road kill I got used to on the world run. It was also great to do a bit of running in the countryside again.

We’ll be heading in that direction again in a couple of weeks, this time to the Shoalhaven River with such characters from the world run as The Hud (60 km with me one day, followed by 51 km the next) and Dave (57 km in one day).