Something I didn’t comment about on Monday after my 61 km run, yet it’s an issue I know many are interested in – eating before and during long bouts of exercise. I actually wrote an article about this topic recently for Azumio which should be appearing soon on their smartphone app.

Many falsely believe it’s necessary to eat regularly when you exercise for moderately long periods. Yes, it’s necessary for extreme bouts of exercise, but not for moderately long exercise sessions. I ate nothing before my run on Monday (which lasted nearly six hours) and nothing during it (I never do). In fact, I wasn’t even hungry when I finished, and didn’t have anything to eat until mid afternoon.

I know everyone is different, and some may have a metabolism that does require regular top ups. But for most people, a need to eat during exercise is simply something to which they’ve let their bodies become accustomed. If you are in that category, it’s possible to wean yourself off this dependency. And if you still have a few issues, a sweet drink every hour or two will be more than enough to give you the necessary junk calories to stave off energy depletion.

That said, I’m sure I will need something to eat during the 12 hour race in Florida. That’s getting up there toward the extreme range. But whatever I do eat during the race will be reasonably minimal. Running with a full stomach is never enjoyable.

Tomorrow I’ll be doing another long run, though not as far as Monday’s – probably only around half that far. After all, it’s only a week out from the race. I’ll report on that tomorrow.

Another interesting point about this and other ultra races – a woman is as likely to win as a is a man. In shorter races, from sprints all the way up to the marathon, it’s accepted that men are physiologically faster. But once the races get up to the ultra distances, particularly the longer ones, the girls really come into their own.  It’s then about stamina, not speed. So don’t be surprised if we have female winners of the various Icarus events.

The world run photo for today is from a pass in the Rockies, not too far from the legendary 14,000 foot high Pike’s Peak. It was a little scary running on the narrow shoulder when vehicles were passing from both directions (for them too, I’m sure), but that’s the nature of a running around the world. 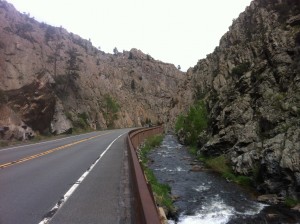 PS The Garmin was inadvertently stopped today, so I have added back in the resulting 740 metres that were missing from the data. In addition, my official position is about 20 km to the east of where the tracker is showing me.