Just finished a 31 km run. I averaged 5:30 per km, though the second half was three minutes faster than the first half. In fact, I ran the last kilometre in 4:35. It was a good final hit out before next week’s race. I won’t be running that fast in the race itself but, as training, it’s a great way to help a slower pace to seem easier.

I’m hoping to knock over another 30 km next Tuesday on the race course, but that will depend on how I’m feeling after my 40 hour flight (door to door) from Sydney to Fort Lauderdale, via Toronto.

The humidity in Florida is a little concerning. Kevin Carr and Jesper Olsen, who are both doing the six day race, are there already and have told me it’s very humid. They’re probably feeling it a bit more than I will, having just flown in from a much colder northern Europe. But I’m sure it will effect me too.

The world run photo for the day is from just down the road from where yesterday’s photo was taken. I’ve posted other photos of this place before – the Garden of the Gods near Colorado Springs – but a few more won’t go astray, so spectacular is the place. 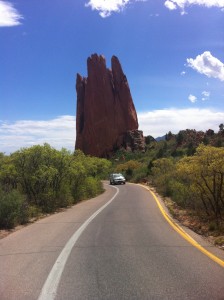