The video below is worth watching if you get a chance. It’s only short. Carmel produced it to commemorate me reaching the second half of my run around the world. The blog posts are from my time around Mendoza, at the foothills of the Andes.

Sorry folks, I’ve had to take another day to get organised, ahead of the run across Argentina. I’ll definitely be back on the road tomorrow.

There was plenty of drama yesterday, as we drove the Chilean hire car back to Santiago. It all started well, and we made good time to the border. The Chilean border experience wasn’t too bad, although we had to get documents stamped at four different windows and then have the car inspected. We initially stood in line for 20 minutes behind a bus load of passengers, before being told we should be in another line.

Once we got down the mountain, we hit the freeway to Santiago. We had to pass through two toll booths – but, of course, we’d exchanged all our Chilean money days earlier. We had nothing to pay with, and they didn’t take credit card. At the first booth, a kind officer agreed to exchange some Chilean pesos for Argentinean pesos. That got us through the first booth, but then we reached another. A line quickly formed behind us, and there was a mass of honking. We did find the equivalent $1.20 in old Chilean coins (about one-third of the toll), and the officer let us through to avoid more anger from cars behind.

That was all very stressful, but the real fun was about to begin. After the GPS led us up one wrong road, we returned the car to the airport without incident and checked in for our flight back to Mendoza. However, because Australia makes Argentineans pay a fee to enter Australia, there is now a reciprocity fee. It has only recently been invoked, and there are many teething problems. We didn’t know we had to pay it, but were happy to when told.

The problem is, however, it can only be paid by the internet ahead of arrival – no exceptions. The very helpful Aerolineas Argentinas staff took us downstairs to their office, so that we could pay via the internet. However, the web site was down, and we were unable to make the payment. The panic was starting to set in. All our luggage was back in the hotel room in Mendoza. We had nothing in Santiago but the clothes on our back, and we looked like being refused the right to fly.

Just then, another Australian – a young guy from Bellingen, via Manly, called Tyler – showed up with the same problem. He must have brought us all luck, as the web site suddenly started working, and we all got our reciprocity fees paid in time and made our flight (and had a great view from the plane of Aconcagua – all 7 km high of it). Many thanks to the the staff at the airport for their help, including Danny, who spent 22 years working in Auckland.

We then picked up the new hire car in Mendoza, and again had great help from Gerardo. He also helped us with other issues this morning. And to top it off, we also had fantastic help from Daniel at the Mendoza tourism office today. We think we’re pretty much sorted now.

One problem will be the remoteness during the next week or so. It will not be easy finding hotels along the run route, and there may be days where I am unable to post the daily blog report.

On other matters, thanks also to Jimbo for updating the route maps (see Journey), including a new South America map.

And I’d like to revive the old Red Wine Value Quotient (RWVQ) concept. However, this time, I’d like to add a restaurant category. As we all know, wine costs more in restaurants, so the value quotient will always appear lower. But this is somewhat unfair. The other night we had a Santa Julia Syrah. It’s a local Mendoza offering – a beautiful wine with a great body – and it only cost about $10 at the restaurant. Given that I rated it an 8 out of 10, this gives it a RWVQ of 51.2. Although this is not as high as the $1.73 wine from a supermarket we had in California (I can’t remember its name now), it is excellent for a wine purchased in a restaurant. Then again, Mendoza is simply great value for wine, full stop.

Tune in tomorrow for a proper run update.

I got through a solid 50 km, on a mixture of roads, cycle paths, and shoulders of hard packed dirt. There were many eucalyptus trees along the side of the road, and the heat caused them to be more fragrant than usual as they baked in the sun. It brought back memories of the Tour de Bois.

The problem of the day, however, was the air conditioning in the hire car was not working. Carmel was absolutely sweltering in the heat, and she doesn’t feel safe enough in these remote areas to sit with the windows down, the doors open, or to get out and walk around. So we got in touch with Hertz. Once again, they were very helpful, and agreed to change the car. So, after I finished my run, we drove back to Mendoza (by now, 70 km away), and exchanged the car. 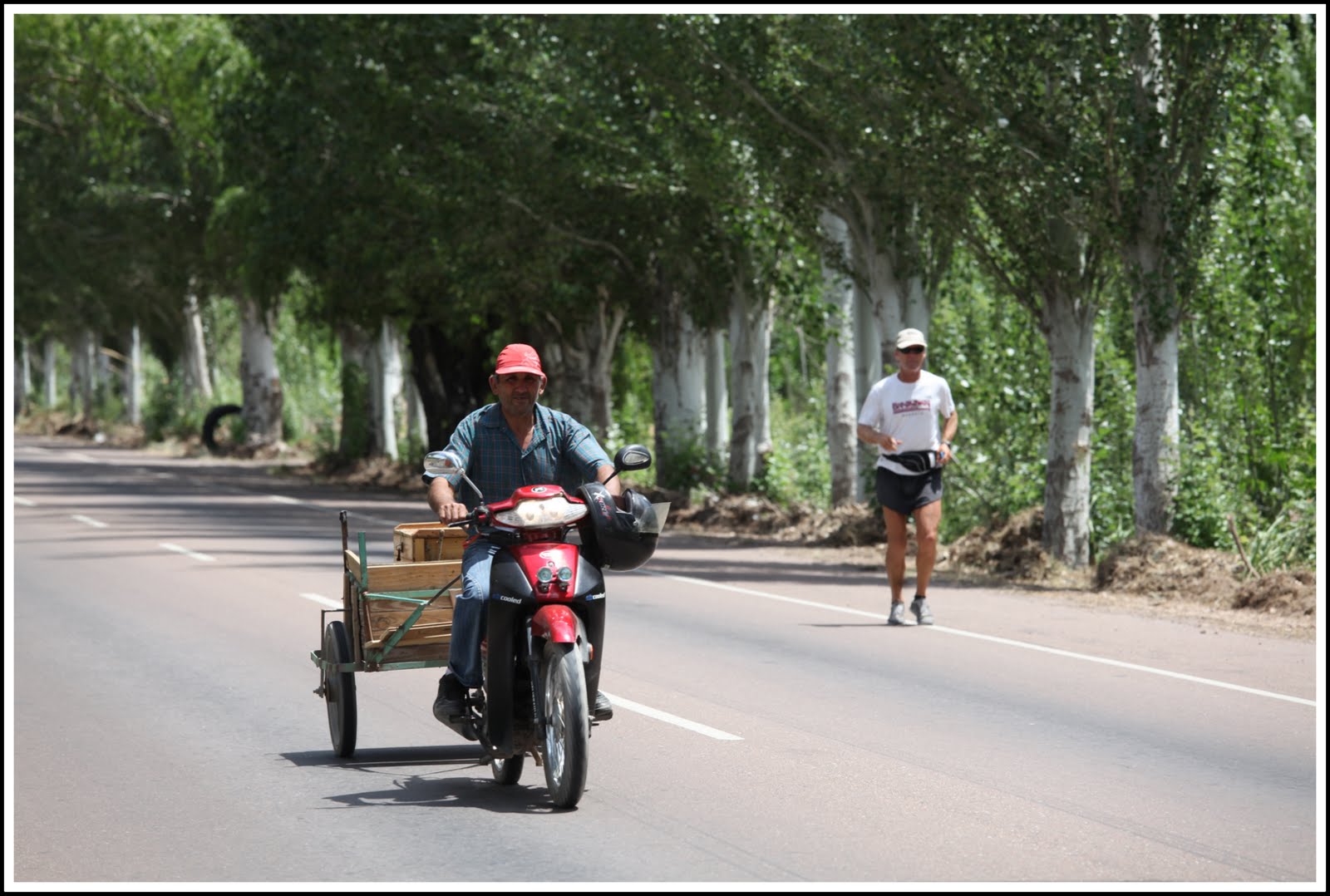 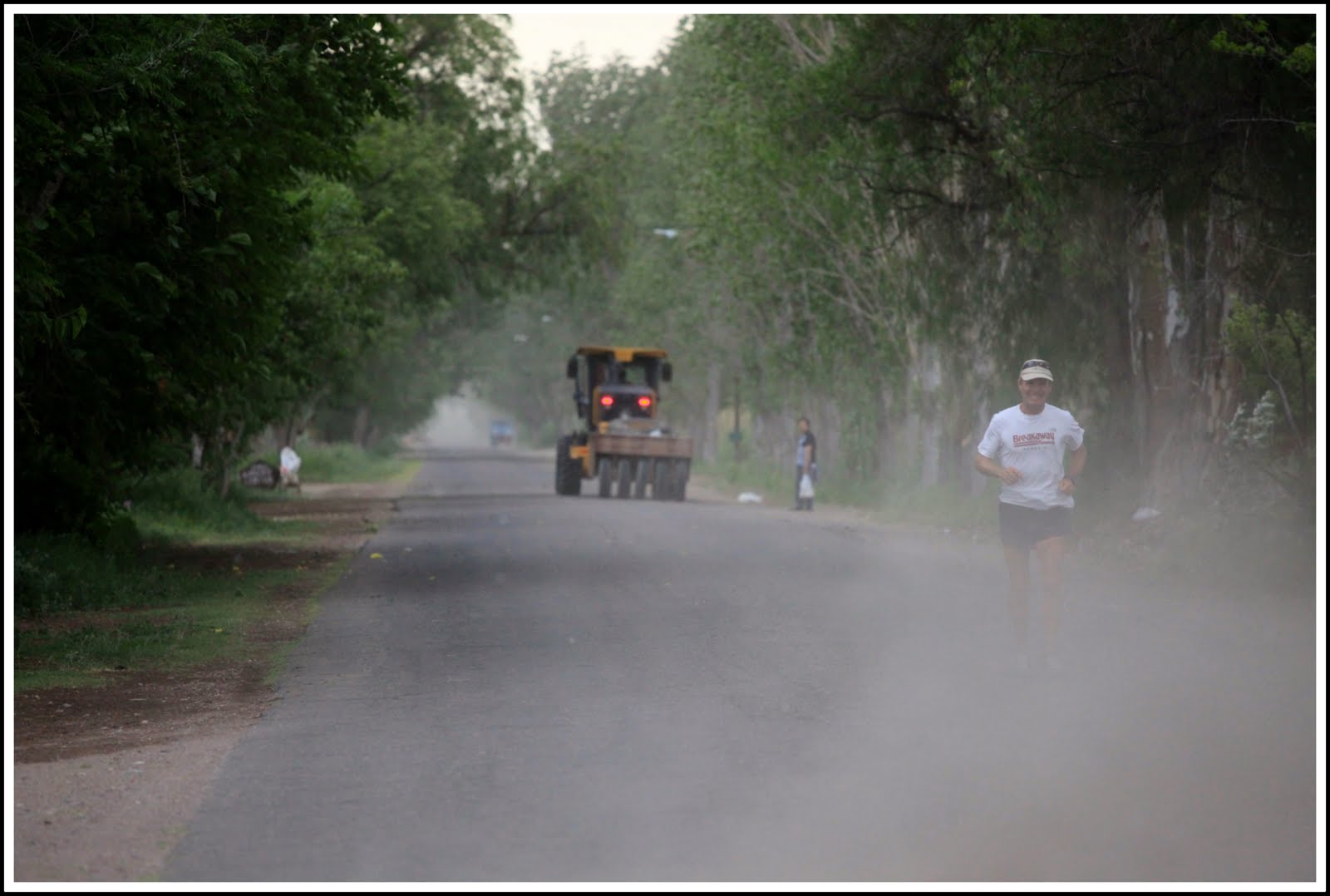