After already travelling for nearly 40 hours from Sydney, I attempted to check in for the final leg of my journey this morning from Toronto to Fort Lauderdale. Unfortunately, Toronto Airport on a Monday morning is chaos, and this morning was worse than normal, probably due to extra security because of the Paris attacks.

I, along with many many hundreds of others, spent five hours in four different queues before I finally reached my gate. Unfortunately, of course, I had missed my flight. Everyone else did too. So I’m now booked on a flight this afternoon, eight hours later than the one I was supposed to take. At least I won’t miss my race, which is not until Saturday.

By the time I arrive I’ll have spent 50 hours travelling from door to door. I think that’s a new record for me. It’s far too long to spend on planes and in airports on a single trip. The positive is that I’m not feeling too badly at the moment. Maybe it will hit later. I’m now going to have to wait until tomorrow before I get my first look at how the runners are doing in the six day race.

I did want to post a photo from the race today, but I guess it’s just going to have to be another from the world run for the moment. This long straight road is from South Dakota (not all that far from where I am at the moment). I’d rather be out on this road than stuck in an airport. 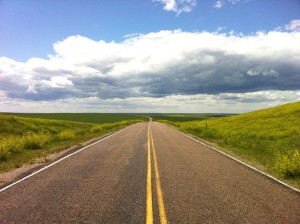 A bit of everything today as far as the weather was concerned. It was hot and sunny in the morning, but just after midday I was stung by a dust storm. At times I had to run with my eyes closed. Then, by mid-afternoon, it started to hail. The stones weren’t too big – about the size of a marble – but there were plenty of them. Luckily for me, Carmel was stopped just up the road, and I was able to wait out the storm in the car. A quarter hour later, the sun was back out, and it was a very pleasant late afternoon of running.

I had a very late start to the day, as the new hire car appeared to be overheating. We couldn’t afford for anything to go wrong in the more remote parts, so we took it back to Hertz. Gerardo checked it out, and everything was fine. Then we had to drive the 70 km back to my start point for the day.

Lunch was in a small café in a little town. We had the lomo y huevos en pan – basically a steak and egg sandwich. It was really quite nice.

There were, surprisingly, several sections of bike path along the way, which I appreciated. Later in the day I had to run on the road, but, by this stage it was very quiet.

Towns are a long way apart out here, and we had to drive 24 km to the nearest option with accommodation. Luckily there was accommodation, and it even comes with wi-fi. Tomorrow I will run to the town and then a similar distance past it, so we will then drive back and spend a second night here in La Paz (no, that’s not the city in Bolivia).