I ran 120 km last week, which was almost 100 km more than the previous week. I now feel I’ve recovered from the break from running during the Tour de Bois. I had a good 18 km run this morning at a decent pace, finishing faster than I started.

I’ll have an easier run tomorrow ahead of an expected 50 km jaunt on Wednesday. I’ll probably only have a chance at one more really long run after that before leaving for Florida on the 15th. However, I’d like to fit in two if possible. It will depend somewhat on the weather.

Today’s world run photo is from the Arizona desert in the north-east of the state. You may think you’ve seen this one before, but there were so many similar visages. I have several photos just like it, having posted some of them before. It may look like a boring place to run, but it was far from it. I really enjoyed my time running through this part of the world. 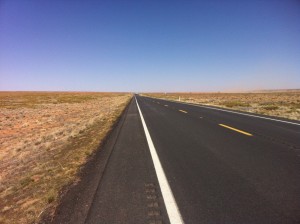 There was no blog on this day as Carmel and I were en route to Valparaiso in Chile ahead of beginning the South American leg.