I’m very pleased to report that yesterday I won my first ultra marathon race, the Icarus 12 hour event. I covered 108 km during that time in 30 C heat and 96% humidity. The conditions were stifling, hence the distance wasn’t that great for a 12 hour race.

But the worst thing was how I felt at the end. I had held it together reasonably well until the finish, but went downhill drastically after that. People make jokes all the time about their brain not working, but that was literally what happened to me – low blood glucose to the brain meant I was incapable of functioning. I had to be looked after and checked on during the night to ensure I was still breathing, so worried were the organisers and helpers.

But I’m not too bad now. That sort of affliction comes on fast and disappears fairly quickly too. Thanks to Carey, Tony Mangan, and race organiser Andrei for taking care of me in my moment of need. And Tony was a great support throughout the day, providing me with drinks and food so I didn’t have to stop regularly.

All in all, it was a great day – well, six days for some. I thoroughly enjoyed my time during the week, watching all the races that started before mine, and running my own. It was a truly international field and I’ve made some great new friends. And to top it off, it was my first ever official race win. I’ve placed 2nd in a major race before, but never 1st. Now I can tick that one off my list. And Kevin Carr managed a very credible 2nd in his first six day race. And the icing on the cake was the coming together of all four officially ratified world runners at the one event. Thanks also to Andrei for coordinating that.

The photo for today is one from the past. This is me running at Stanwell Tops on my Melbourne to Sydney 1000 km jaunt in 2009, the day before I finished in Sydney. It’s much like the Big Sur stretch of coastline I encountered in California on the world run. 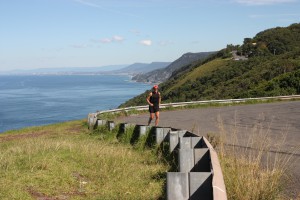