The world run photos for today include one of a big splinter. It was on this day in 2012, just after I passed the state border checkpoint at Justo Daract in Argentina (photo of this included too), that I stepped on a wooden skewer on the side of the road. It went right through my shoe and into my foot, breaking off at the sole of my shoe.

I tried to take off my shoe, but the piece of wood you can see in the photo – roughly half of what you can see was in my foot, the half in the sole of the shoe – was pinning the shoe to my foot. It was impossible to take off the shoe. My only option was to pull the skewer out with my fingers, but that was very difficult as I could only grip about 1 mm of it.

With an extreme effort, I finally managed to pull it out of both my foot and the shoe in one go. I thought I’d be in a lot of pain when I recommenced running but, amazingly, I didn’t feel any pain at all once it was out. It was a potentially run-finishing drama that ended positively. 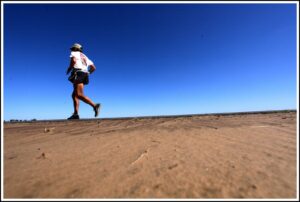 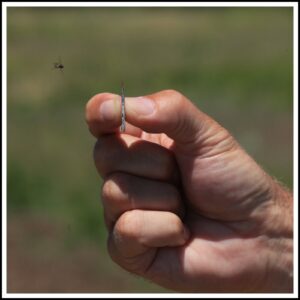 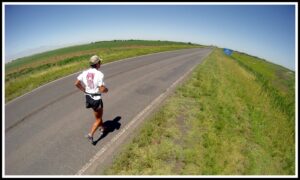