I’m now back in Australia and, after a good night of sleep, am feeling surprisingly alive. The flight back took 33 hours, but at least I had three seats to myself on the long Vancouver to Sydney leg on a relatively empty flight. It was a lot better than the 50 hours, door to door, going over.

My quads are still quite heavy and sore, which is nothing to be surprised at. I could take some anti inflammatories, but I’d rather know exactly where the pains are, so that I can avoid harming those muscles further. Other than the quads, nothing else is sore at all. I’m feeling pretty good. I’m going to take it very slowly, however. No need to be silly and take risks.

On the race itself, I have had discussions with a number of experienced ultra runners and the general opinion is that each runner would probably have run about 15% to 20% further, had the conditions been cool and ideal. That means I would have run between 125 km and 130 km in ideal conditions. That measures up pretty well to how I started. I was doing it easy early on, passing through the first marathon in a tick over four hours. If it hadn’t been hot and extremely humid, I feel I could have comfortably kept up that pace to the finish. in fact, in ideal conditions I reckon I’d have likely run a total of three marathons or more within the 12 hours, at an average of about 3:58 per marathon – I estimate about 127 km overall. It’s still a long way short of Yiannis Kouros’s world record for 12 hours of 162 km, but then again, my name should never be uttered in the same breath as that of Kouros.

A bit of a different photo for today. A few months before I started my world run I embarked upon a somewhat unusual training period, cycling for three weeks through Europe with Dave, including through the Pyrenees, Alps, and Mont Ventoux. I believe it helped me no end on the world run itself. The photo below is one I took looking back down from the top of the Col du Tourmalet in the Pyrenees. It’s a tough climb on a bike. 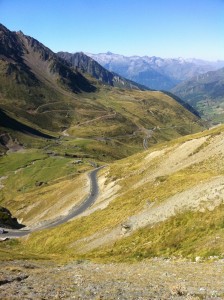 Today was as flat as it has been for the past week, which reminds me of the reply I received from the manager of the Department of Similes, Watto from Wagga Wagga. He informed me of the old saying from many decades ago, before the advent of widespread sewerage systems in Australia – “as flat as a dunny carter’s hat” (actually, the more popular version of the time was ” as flat as a s**t carter’s hat”). In those days, when hats were de rigeur, these unfortunate toilet carters would carry the pan on their head to the waiting truck, thereby flattening their hats. Good one, Watto! So, today was as flat as a dunny carter’s hat.

The mosquitoes have been bad on the road recently. They even attack while I’m running. I have to keep moving at a minumum speed to avoid being bitten. It’s a bit like the movie Speed, only the bomb on the bus has been replaced by dive-bombing mosquitoes.