I’m tentatively positive about the improvement in my right hip. Not sure if it’s the anti inflammatories or not, but I am noticing a marked improvement in my running. However, the whole hip region feels weak now that I’m back to running without favouring it. That’s to be expected, as I’m sure the muscles on that side have been taking it very easy for a few weeks and have atrophied to a degree.

I did manage to cover 120 km last week, my biggest week since the 12 hour run back in early August. This week will probably be easier as I have to go to Tasmania for work tomorrow. Although I’ll likely to do less running, I will certainly do some, and it will be a pleasure to do so in one of the best running environments on the planet.

Seeing as I was running through Argentina this time four years ago, I thought I’d keep the Argentinian theme going with the photos. This one is in the Andes. I’m the white speck on the road. 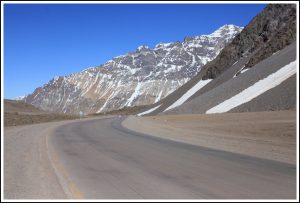