Just a short run today, but I’m looking forward to doing 50 km tomorrow. It will be my longest run since the Anzac Ultra back in April.

Interestingly, this morning I ran past Simon Bouda raking his front lawn, stopping to have a chat with him. For those familiar with the video at the top of my web page (Tom’s Next Step for those who view this blog post on Facebook), Simon met up with me during the world run in Serbia in 2013 and did a segment which later aired on the Channel 9 Today Show. This segment is the video to which I referred – have a look for old time’s sake.

Today’s photo is of the motel we stayed at in Monument Valley. On the bottom left of the picture is Carmel walking up towards the motel restaurant where we ate that night. The next morning I ran through Monument Valley itself, including the stop for the Forrest Gump photos of me with the wig and beard. 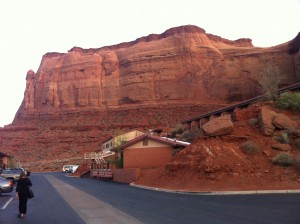 The road kill has changed from deer and raccoons to dogs. Although I only saw three dead dogs, it was more than I’ve ever seen before in one day. The drivers are definitely faster than in the US, although I didn’t see any manoeuvers that were too outrageous.