Yesterday we rode a time trial up the rail trail between Everton and Beechworth in northern Victoria. It’s a fantastic climb of nearly 1,000 feet over 7 km. We’ve done the same event three times before. I was very pleased to ride a time that was faster than I did four years ago (just after I finished the world run), and the second fastest of my four attempts.

Then this morning I went out for a run. I was feeling the best I have in weeks, with no problems with my glute at all. Then, 4 km into the run, I trod on a rock and twisted my left ankle. The ankle was OK, but in an attempt to stabilise myself, I tore my glute in exactly the region it had been sore. I was in agony for several minutes. I then found I could only run uphill without pain, and not downhill or on the flat. I hope it’s not too bad, though I have much more confidence in my recovery ability from trauma injuries like this than from overuse injuries. Time will tell.

Today is the last day of the 30th Tour de Bois. We ride to Albury, through Yackandandah. Here’s a photo from a couple of days ago, taken near Tungamah. Most readers won’t have heard of any of these places before, but that’s why we go there. 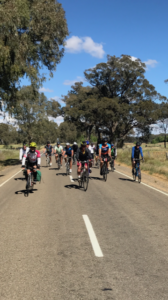