Yesterday I ran 53 km. I didn’t feel particularly good, suffering from very heavy legs right from the start. Regardless, I was pleased with the outcome, averaging 5:40 per km, going through the marathon distance in just under 4 hours, and finishing the final kilometre in 5:10. I also ran it in negative splits. For those unfamiliar with that term, it means the second half was faster than the first. In fact the second half was four minutes faster.

Unusually for a training run, I now have sore quads. A few weeks ago I was running somewhat similar distances, and faster, with no ensuing soreness at all. Now I feel like I’ve just raced the downhills of the City to Surf. Well, it’s not that bad, and I had no trouble with a short run this morning, but it’s intriguing as to why things have changed. I can only put it down to the two weeks of very low mileage. My legs must have lost more condition than I realised.

Today’s world run photo follows on from the photo in the last post. This was the view from our motel room in Monument Valley. The sun had set by this time, but a little earlier the mesas in the background were brilliantly lit. You can imagine what a joy it was to run through that same region the next day. 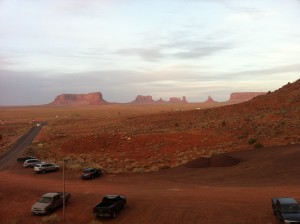 I wouldn’t be concerned about the climb if I was acclimatized to the altitude. I have received some good tips from fellow world runner, Jesper Olsen, who ran this pass last year, from the opposite direction. He was fine, but he’s also a better runner than me, and he was reasonably acclimatized at the time. We’ll have to see how I go. I’ve run to the top of the Haleakala volcano on Maui three times (a 10,000 feet climb), all without any acclimatization to altitude. Twice I was fine, and the other time I suffered badly. This pass is another 3,000 feet higher again. If I do find myself in trouble, at least I’ll have a great view to ease the pain.