Today marks the three year anniversary of my near-death experience at the top of the pass over the Andes. If you’ve read my book, you’ll remember this incident from the first chapter. And you can read all about it again at the bottom of this post, just after the photo.

Since Wednesday’s 53 km I’ve been taking it a bit easier. But not for long – I intend to do an even longer run on Monday, possibly as much as 60 km. If I can fit it in I’ll also do a similarly long run at the end of next week.

I then fly to Florida. From door to door it will be a 40 hour flight, with a long stopover in Toronto (yes, an unusual route to Florida). So I don’t know how I’ll be feeling in terms of running when I get there. I arrive on Monday week and would like to do another run of a reasonable distance on the Tuesday, ahead of the race on the Saturday. I’ll have to wait and see how I feel as far as that long Tuesday run goes. A 40 hour flight tends to make you a little tired.

On a different topic, for those readers looking to be inspired to take on their own challenge, you may be interested in the following story I was sent.

The world run photo for the day is another of those long straight roads in Arizona, between the Grand Canyon and Monument Valley. Traffic was sparse, the shoulder was good (you can see it on both sides), and the temperature was perfect, making for very pleasant running. 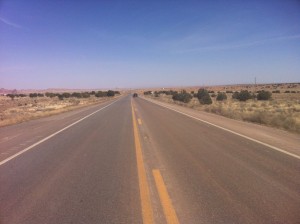 The day dawned without a cloud in the sky (again), and I headed off, up past the Chilean border control check point. I eventually reached the turn I had to make. These days there is a modern tunnel linking Chile and Argentina, which runs right through the mountain at about 3150 metres in altitude. However, there is also an old dirt road that winds its way to the top of the pass, at 3832 metres in altitude. Since the tunnel does not allow pedestrians and cyclists, this was the road I had to take.

PS Today’s run involved 66 hairpin turns. Have a look at the Garmin track.