I’ve just concluded a 61 km run, feeling very comfortable throughout and finishing strongly. I took an entirely different route from that of past long runs. From home I headed out to Revesby and Picnic Point via Canterbury Road, and then cam home via Henry Lawson Drive and Forest Road. In fact, I ran through suburbs of Sydney I’d never previously ventured into. That made it a much more interesting run than if I’d done the same old courses from years past.

The downside was having to stop regularly for traffic lights and intersections as I ran through Sydney morning peak hour traffic. This slowed my average pace quite significantly, but when I was able to get into a rhythm on less busy roads I was consistently punching out kilometres in around 5:40 or under. And it was fairly effortless.

Compared to the course I’ll be running in the Icarus 12 hour race, today was much hillier and entailed countless ups and downs on the seemingly never ending sequence of kerbs and gutters. And the whole day was run on concrete sidewalks – probably the hardest surface on which to run.

The total uphill was well over 500 metres – not too much short of 2,000 feet – which is certainly not a trivial day of climbing. Without the traffic interruptions, my time through the marathon distance would have been under four hours. You can view the Garmin data and track for the run by clicking on Garmin Link (I started with a warmup kilometre before clicking the Garmin on, so the data shows just 60 km, not 61 km).  And I finished with a 4:55 for the final kilometre, doing it very comfortably.

All in all, it was a very pleasing effort. I just hope I can emulate it in twelve days time.

The world run photo for today is another from our motel in Monument Valley. I never get tired of the views of this place. 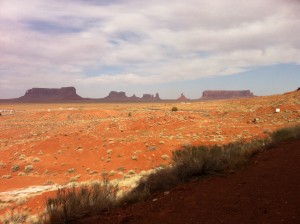 I’m also quite sore in the quads after all the downhill running. However, there has also been a lot of uphill, as evidenced by the fact my cumulative ascent today was 1,000 metres.