This week will again entail at least 100 km of running, but I think I’ll have an easy one next week. I still have a few niggles after the 12 hour run in August. They’re not enough to stop me running, but they’re not going away either. I reckon an easy week will go a long way toward curing these ‘ills’.

I also have the Tour de Bois coming up in three weeks. That usually results in an easier week of running, though not always. Before I started running around the world, I used the Tour to fit in some big runs as training. Some days I would run as far as the other guys would ride.

This photo was taken early in the world run, as I made my way up the main street of the Californian town of Carmel at the end of a long day from Watsonville. Clint Eastwood used to be the Mayor of Carmel. And Carmel, of course, loved being in the town that bore her name. Just behind me you can see where we (Carmel, Libby, Jenny, and I) ate dinner that night. 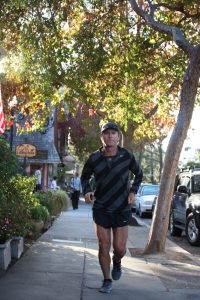