With the running I’v done crewing for Tony Mangan this week, I’ve ended up with a total of 130 km for the week. Definitely the biggest week I’ve had since the Big Red Run.

Tony officially finished his Australian leg today, walking into the surf at Bondi Beach. I accompanied him from the Town Hall in the city to Bondi, along with Heather Hawkins, who did the North Pole Marathon with Tony a couple of years ago. Heather, as it turns out, lives just 1 km away from me. Tony’s good mate from Melbourne, Michael Gillan, came up to meet Tony at Bondi too.

Here’s a photo of Tony finishing at Bondi Beach. He started Australia at Scarborough Beach in Perth five months ago, dipping his toes in the water there. Great accomplishment, Tony. 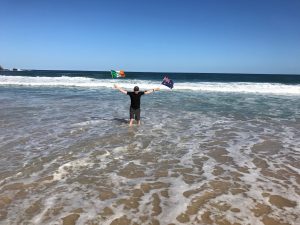