Last week was only my second since late May in which I didn’t run at least 100 km. I can already feel my lower leg strain improving significantly. I’m going to have another relatively easy week to ensure I don’t have a relapse.

As I mentioned a little while back, my aim next year is to run the Melbourne Oxfam 100 km Trailwalker event in April, the Sutherland Relay for Life Marathon in May, and the Big Red Run in the Simpson Desert in June. Even the first of these events is still six months away, so there’s plenty of time to prepare. My intention is to maintain my general fitness until early February and then start to really up the mileage.

I saw on the news tonight how the Rolling Stones have been playing in Coachella in the Californian desert, along with Paul McCartney, Neil Young and many others. I ran through Coachella during my world run. Pity I didn’t do so during the annual music festival. And Mick Jagger made the comment yesterday that he was looking forward to seeing the nearby dinosaur park. I ran right past it too, taking the photo you see below. These were life size dinosaur models. 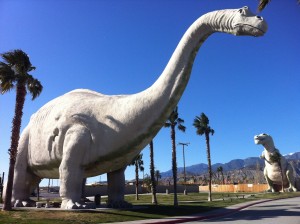 It was a very hilly day, though the hills came in three distinct sections. Once again, the uphills were more enjoyable than the downhills.

This morning I passed a cow with a very newborn calf. The mother was licking the baby, and still had part of the placenta hanging from her. The calf’s umbilical cord was dangling beneath it, and was covered in blood. I estimate I missed the birth by no more than a few minutes.

I’ve had some big donations in the past few days, and I’d like to thank all the St Charles’ School community in Waverley, Sydney, Australia in particular. The school had a ‘Crazy Sock Day’ and a second hand book sale and raised a $1000! Amazing effort kids! Many thanks to Marcelle McNally for co-ordinating the fund raising event. Also, thanks to the Miami Motel in Canandaigua – a great 1950s style motel that has been tastefully renovated, preserving the important bits, while ensuring none of the modern comforts are missing.

Now, for the winners of yesterday’s song trivia question. The answer was James Taylor’s Sweet Baby James. First prize goes to Chook Evans, while Bernie Breen followed very close behind. Thanks also to those others who answered correctly.