Like last Wednesday, I threw in a long 28 km run today. It was pretty much over the exact same coastal course too. However, I was quite a bit faster today. Not sure why – I just seemed to be going quicker for the same effort. I will likely do another 3 km time trial on Friday. I hope my legs freshen up by then.

Last night I watched a fitness documentary where the hosts took a VO2 max test. I saw another doco recently where the same thing happened. Each of them measured a VO2 max in the mid to high 30s. This was considered reasonable, especially since those being tested were journalists, not professional athletes.

It reminded me of the only VO2 max test I’ve ever undergone. It was way back in early 1991, just before I competed in the Forster Ironman Triathlon (which is the last triathlon I ever did). My VO2 max reading was 78 on that occasion. I was a lot younger then (of course) and I was reasonably fit – apparently one’s VO2 max declines with both age and reduced fitness level.

Watching those shows made me curious as to what my VO2 max would be now. Clearly I’m older, but I’m probably as fit, if not fitter, than I was back then. Anyhow, I don’t know how I go about having it measured. It’s not the sort of test your doctor can perform. Last time it was part of a university study, as such tests are normally performed as part of the research conducted by institutes of sport etc. Maybe one day I’ll get the chance again.

This photo was taken in the town of Tauranga, right up north on the North Island of NZ. The local high school cross-country coach contacted me and had me visit the school as I ran through town. I met the students and parents over a BBQ that night, then did some brief running with the team the next morning, before setting out for another day on my world run. 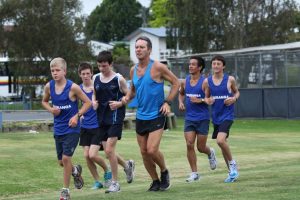