I had a great long run this morning, covering 40 km in 3 hours 30 mins, and the last kilometre in 4:45. That translates to a marathon in 3 hours 41 mins, had I decided to run a couple more kilometres. The aim of the session was to improve my “floating speed” – the pace at which I can run comfortably for hours. I’ve pretty much got that down to 5 min/km now.

I felt very comfortable throughout the run, although it was getting quite hot by the end, reaching 29 C. The most pleasing aspect is that I can now run for hours at a time without my thighs getting sore at all. That has always been the limiting factor in how far I’ve been able to run. For some reason, probably my forefoot running style, I can now run much further at a decent pace without an noticeable deterioration in my quads. In fact, in cool conditions, I’m pretty confident I could knock over a sub 3 hour 20 mins marathon at the moment.

Today’s world run photo is a selfie I took in the snow in Arizona. It was the first snowy day of many on the world run – quite a novelty at the time, which is something I can’t say about the constant snow I encountered later in France and Germany. 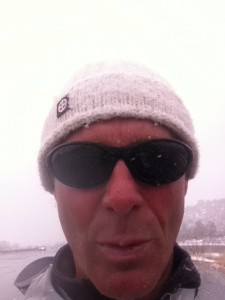 I’m continuing to make progress toward running faster. I keep the distances relatively small – 12 km has been my longest run since finishing at the Opera House – but I either run the whole lot at a faster pace, or I throw in some very fast shorter bits. All in all, I’m pretty pleased with how it’s going, though I still have a way to go before I’m back to pre-world run speed.

I have also begun the long process of writing a book about my adventures on the world run. I’m not sure how long it will take, but I will keep readers apprised of the progress.

I also have some very interesting news, some of which I’m not at liberty to reveal just yet. The Australian National Library has requested permission to archive the web site. If the web site was a book, this would be akin to including it as one of the books in the library. The web site will now be readily available to any and all researchers or other interested people. As for the other piece of news, it’s even bigger, but will have to wait until I have permission to reveal it. As soon as that occurs, I will write about it in this space.