A couple of days ago I mentioned how I’d run through Coachella in the southern Californian desert during my world run, and how the Rolling Stones, Paul McCartney, and Neil Young had played there last weekend. I should have added Bob Dylan and The Who in that group.

I remember the day I passed through Coachella very well. I began a little to the north at the town of Indio. Located just past Coachella is the largest date farm in the US. It’s run a little like a winery, with a “cellar door” where you can sample various products made from dates. One of these is their famous date shake – like a milkshake, but made from blended dates with a bit of milk. It sounded delicious to me, so I stopped and ordered the largest version.

It was a mistake. The first few mouthfuls were, as I thought, delicious. However, it soon became obvious that the shake was far too sickly sweet. It was all natural sugar from the dates, but there was just too much of it. I’d mistakenly considered it a “fluid” and intended to use it as a form of hydration. It actually did the opposite. Sugar bonds to water, and it effectively dehydrated me in an already unbelievably dry climate (Coachella is just to the north of the Salton Sea, which is the second lowest point in North America, well below sea level). And the worst thing was, I’d told the support crew (Carmel, Libby, and Jenny) that I’d be fine for the day without their help. I ended up running another 40 km before I found a shop where I could get a drink. It was the thirstiest I ever was during my run around the world.

Speaking of drinks, here’s me relaxing and enjoying a beer in the bath in the small town of Pescadero, a day’s running south of San Francisco. Pescadero was one of my favourite small towns in the US. 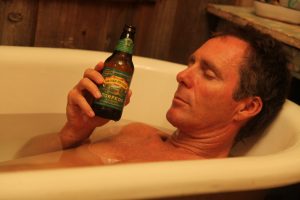