Yesterday I woke up with the same pain in my right glute as I experienced for a month or so before the Big Red Run. To be fair, I felt it initially on Monday, but it had been relatively minor until yesterday. I have no idea what caused it. I’d had a very light day on Sunday, so it was a mystery as to why it should pop up again on Monday.

Anyhow, I want to nip it in the bud and don’t want it to be ongoing like last time. So I didn’t do my planned 3 km time trial today. That would have been foolish. Admittedly, I suffered from the same thing right up to the BRR in June. I almost pulled out of the race, believing I was no chance of completing it. But, like with my heel issue on the world run, as soon as I started loading it up on a regular and steady basis each day, the problem went away. I’m still not entirely sure why this is the case, but it worked on those occasions. This time, however, I’m going to try resting it a little to begin with.

This photo from my world run was taken in New Zealand. It’s actually a good example of the Kiwis “taking the piss” out of themselves. For non Kiwis and Aussies, this sign may not make a lot of sense, but if you are from one of these two countries, you’ll immediately get the joke. 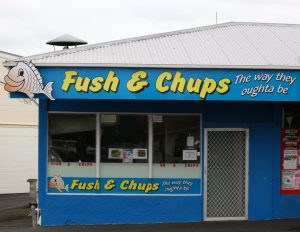