I’m in Melbourne this week and my run this morning took me along part of the same route I traversed when I ran into Melbourne on my world run. On that occasion I ran straight down Spencer Street, past the railway station and on to the The Age newspaper building, where I did an interview on the lawn outside. This morning I ran that same course, more than three years later.

Here’s another photo from the Big Sur stretch of coastline in California. You can just make me out as a black dot on the bridge. It wasn’t too much later that I reached San Simeon, where the Hearst Mansion is located. The girls (Carmel, Libby, and Jenny) spent half a day there. I just kept on running past “the big house on the hill”, but I could see it from the road. 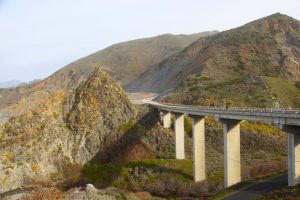 The weather was terrible, but I enjoyed the day regardless. I headed down through Times Square to Tribeca, where I was joined by Aussie Mark for part of the run. Mark is organizing New York’s inaugural ultramarathon fun run, the MadhattanRun.com, around the island.