This morning I dropped Tony Mangan at his restart position at Bondi Beach, where he began the continuation of his world walk.  Tony will now be heading north to Mackay, before taking a break from Australia over the heat of summer. During that time he’ll be walking the length of New Zealand. He’ll then head back to Mackay and walk up to Darwin.

It was a great five days I spent with Tony – always good to catch up with another world runner/walker (and Tony is both). Carmel also enjoyed meeting Tony, for the first time in her case.

Don’t forget too, that Tony is still the current world record holder for 48 hours indoors. He covered 426 km in that 48 hour race. Amazing!!! As a parting gesture, below is another photo of Tony finishing his Australian leg at Bondi Beach.

I’m involved in less demanding feats at the moment – just some basic maintenance running. This morning I completed a solid but uneventful 15 km run, all aimed at next year’s racing season, beginning with the King Island 32 km in March. 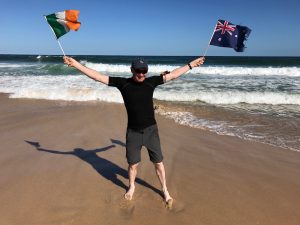