I’d planned on a long run this morning, but have felt well below par these past few days. But I got out on the road anyway and knocked over 42 km in just over four hours. I even ran the last kilometre quite easily in under five minutes, finishing strongly.

It was only a marathon, but more importantly, it was one-third of the time I’ll be on my feet in the 12 hour race next month. I’m reasonably happy with how it’s going. I shouldn’t have much trouble reaching at least 100 km.  Anything after that’s a bonus.

Today’s photo was taken in western Arizona as I was leaving the town of Hope. The town elders certainly have a sense of humour, even if they don’t understand the difference between “your” and “you’re”. 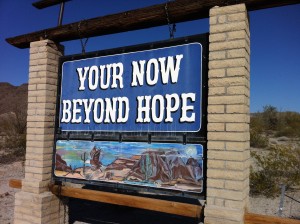 Today was even more chilly, resulting in me wearing my jacket for the first time in months. I ran on very quiet roads through Amish country. The countryside was beautiful and I really enjoyed the day. I passed plenty of Amish horse and carriages, and many young Amish on bikes.

I passed a corral, and two pigs ran to the fence to greet me. They stuck their heads through to be patted, and then a dog jumped in with them and also came over to be patted. Something different!

Earlier, I had passed a little historical gem. In the middle of nowhere was a plaque, indicating that, in a house that stood on that spot, Henry Flagler was born in 1830. Who was Henry? He was a partner of J.D. Rockefeller in founding Standard Oil, the biggest oil company in the world at the time. He also built the East Coast Miami Railroad, and the bridges to the Florida Keys. The unexpected things you learn on the road!!!