I had a bit of a setback on Monday, though I suspect it’s only minor. I was running well, almost completely free of pain, and faster than I have since before the injury. Too fast, it would appear. After about 8 km the Achilles suddenly started to hurt again.

I had a scheduled visit to my specialist running physio this morning, and he’s not too worried about it. Hopefully I’ll be back where I was within the week.

The World Runners Association is now well and truly in existence. I, along with Jesper Olsen, have been invited to submit our documentation for the purpose of ratifying our respective world runs. The ratification of our runs is expected to then lead immediately to the granting of world records. In Jesper’s case, he’ll qualify for the categories of Most Circumnavigations of the Earth on Foot, and Youngest to Circumnavigate the Earth on Foot. He will also be acknowledged as the First and the original holder of the Fastest category.

As for timing, I’m hoping the ratification and granting of records process might be complete by the end of the month. Stay tuned.

I’ve inserted below an earlier photo of me with a number of the Rabbitohs players. This was taken after I’d given the team a talk about my world run. Sam Burgess is on my left and Greg Inglis is behind me (arguably the world’s best forward and back respectively). You can see how they dwarf me – and I’m 5’11” (1.8 m) tall. Sam is currently in hospital after surgery to repair the fractured cheek bone and eye socket he suffered in Sunday’s Grand Final. 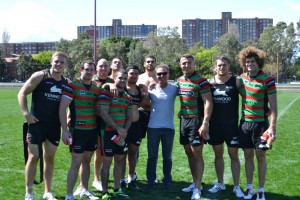 After lunch I found an old rail trail, and ran along it for several miles. The leaves were so thick, it was impossible to see the trail at times. It was a gradual climb after that. finishing at the high point of the day, both literally and figuratively – how could it be otherwise in a town called Horseheads?

The Tour de Bois is over for another year. Last year’s tour, during which I was running in the US, was the first I’ve missed since its inception in 1988. It was nice to be back.

I was fairly happy with how I rode, despite feeling a clear lack of cycling muscles in my legs. We rode two mountain time trials, which were identical to two years ago. I was about 10% slower in both, but that’s understandable. However, I’m not sure that racing up mountains 3,000 feet high, at maximum effort, was what my body needed so soon after finishing the run. I’ve since been a bit tired.

That said, I did feel pretty good this morning on my 7 km daily run, showing more pace than I have for some time. I know I have a lot more muscle mass now in my thighs, as my jeans are a lot tighter than they were a couple of weeks ago. I have also put on a few kilograms – probably a combination of additional muscle mass and the excesses of the tour.

Many people have indicated they miss the blogs, so I will continue to keep readers informed on a regular basis. There should be plenty of news to write about on various fronts.