Until my run around the world, injuries were not a mystery to me. Not that I had too many, but when I did, I knew why they occurred. During and since the world run, however, I’ve had ailments which I can’t really explain. The most mysterious are those that occur when I ease off the running. They’re usually not debilitating, but they have on occasions stopped me from doing very much running. In the past two years there have only been two injuries – a partially torn Achilles in 2014 and a torn calf earlier this year, which were very obvious as to why they occurred. All the other niggles seem to have appeared when I toned down my running, such as the lower leg strain I have at the moment. As I say, it’s a real mystery. Unfortunately, once they occur, increasing my running volume doesn’t seem to cure them.

This photo was taken at a motel in Watsonville, California. I’m pointing to where I was at the time on a globe, with the motel manager, Ana, looking on. I remember that morning, as it was the place where I had to take eight stitches out of my face – no time to go to a doctor. I had to run to the town of Carmel that day, through Monterrey and Pebble Beach. 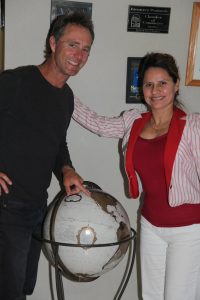 PS I have added in 950 metres to the Garmin data, to make up for what was missed when I forgot to restart the device after a stop.