After running 250 km over the past two weeks, my legs were quite heavy this morning during my speed work session. I managed my 200 metre 10% gradient hill in 48 secs again (it’s actually slightly more than 200 metres), and then 1 km in 3:35. If I can hold on to those sort of times for the next few months, I’ll be very happy going into the new year. By late January I’ll really start focusing on the King Island Imperial 20.

Hannah and Charlie’s wedding on Saturday was a huge success. Many people, including Carmel and I, reckon it was one of the best weddings we’ve ever been to. Now we have Grace and Curtis’s wedding in December to look forward to – yes, that’s correct, two weddings in two months.

Here’s another photo from my world run. This was taken in Taupo. I had the luxury of a spa bath to relax in, which was particularly nice because I had time to enjoy it, having only run a short day that morning. 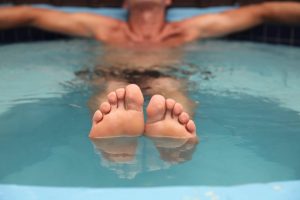