The third anniversary of the finish of my run around the world is rapidly approaching. The run is still so fresh in my mind, it’s hard to fathom it’s been three years since that day at the Sydney Opera House. In fact, in a few months time it will be five years since I started at the Opera House.

My Achilles niggle is behaving very well, despite running the hills of Launceston this week. I’m still taking it easy after the 12 hour run a few weeks ago, but by next week I should be back to normal training.

Sticking the the ‘old favourites” theme, here’s a photo from France near the city of Macon. It had been quite a nice day until a snow squall blew up and nearly froze me. Fifteen minutes later it was back to nice weather. 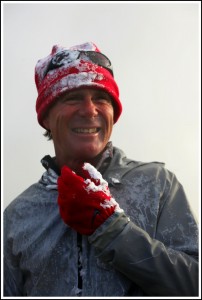 The others headed off home this morning, as I headed back to my starting location. I was met by a local runner, Anthony Metcalfe, who ran with me into Wagga. He had found me via the tracker. Thanks for the company, Anthony. And Hannah and Grace both called me this morning for Father’s Day, so I had plenty of company.