I’m back in Sydney now, so it’s back to running on the same old courses. That’s a bit of a negative, though it does allow me to regain some regularity and up the distances. Today I ran 14 km, which is much more than I’ve averaged recently. The past seven weeks have been interesting from a running perspective, but I haven’t done very much compared to usual.

An interesting thing I noted last week – the time trial for the Vuelta (the Spanish version of the Tour de France) was done on a virtually identical course to a day of running I did during my run around the world. The cycling time trial was from Los Arcos to Logrono. I ran it in the opposite direction, from the far side of Logrono to the other side of Los Arcos. Yes, that means I ran further that day than the Vuelta guys rode last week.

Here’s another photo from the NZ leg of the world run. I’m pretty sure this was taken by Carmel on the South Island near Kaikoura, though it’s getting hard to recall where each and every photo was snapped. To be honest, I’d have no chance with many of the 50,000 or so photos that Carmel took throughout the 20 months. 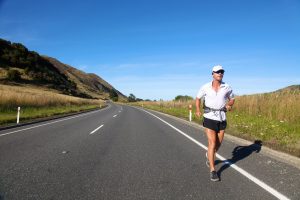