Today marks the second anniversary of me finishing my run around the world at the Sydney Opera House. Wow, where did that two years go?

I remember it so clearly, as you might imagine. Starting the day with a couple of television interviews at Maroubra Beach, followed by some more filming by EPSN  over breakfast at home, I then headed off to the start at Tempe for the run into the city. I had lots of friends running with me that day. We were finally joined by members of the Rabbitohs and were all escorted by the police on bikes down the main street of Sydney and on to the finish at the top of the steps of the Opera House.

Makes me feel like doing it all over again!!!!

To commemorate the occasion, here’s a somewhat relevant photo from the world run. This was taken in the botanical gardens in Hamilton NZ, just a month into the run. I think this was actually taken by Carmel using my phone, as on the path in the background I can be seen with a group from the local running club. Chook is one of those running with me, as this is his home town and these are his running club mates. Chook and a couple of the runners here, Wayne and Rob, were also with me over the final few days of the world run, including the finish at the Opera House. 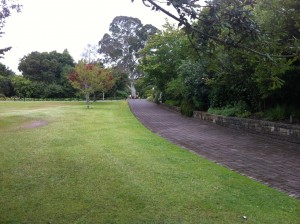 Later, I noted a historic marker indicating an archaeological site where pre-historic locals had lived around 10,000 BC – right on that spot. I have also been enjoying all the Civil War historic markers. There have been hundreds in recent weeks, pointing out a battle that occurred here, a battalion that had camped there, a general had held a meeting in this place, or an army that had eaten breakfast in that place. Knowing these things took place on the ground on which I’m standing is quite surreal.