Today marks the third anniversary of me finishing my run around the world at the Sydney Opera House. As most would concur, it certainly doesn’t seem that long ago. I clearly remember the day, especially arriving to the crowd of onlookers and press. Hopefully the memory doesn’t fade as more years pass.

Yesterday I did my first hill session as part of my training to run the volcanoes of Hawaii. But remember, this isn’t actually going to happen in the near to medium term. I’m just pretending I’m training to run Haleakala and Mauna Kea – well, I’m am doing the training, I’m just not running those volcanoes any time soon. But the training will benefit me. I’m starting slowly, as too much sudden hill work can lead to disaster.

To celebrate the third anniversary of me finishing the world run, here’s a photo taken just moments after I crossed the finish line at the Opera House. It was a classic media scrum, and I felt like the ball in the middle. 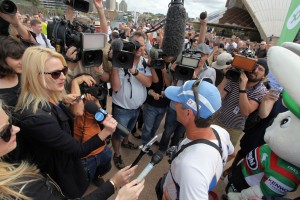 Later, I noted a historic marker indicating an archaeological site where pre-historic locals had lived around 10,000 BC – right on that spot. I have also been enjoying all the Civil War historic markers. There have been hundreds in recent weeks, pointing out a battle that occurred here, a battalion that had camped there, a general had held a meeting in this place, or an army had eaten breakfast in that place. Knowing these things took place on the ground on which I’m standing is quite surreal.