After Tuesday’s three year anniversary of me finishing the world run, there’s another anniversary today – it’s fifteen years to the day since the Opening Ceremony of the Sydney Olympics. Seems more like five years.

I had another good run this morning, feeling like I had lots of energy, so I threw in some fast sections for fun. I still have a niggle in my right heel. It’s not exactly the Achilles – it’s lower than that. I can feel a small piece of scar tissue about half way down the heel bone. Some days it’s fine, while on other days it’s a touch sore until I warm up. I’m trying a little ice at the moment. That seems to help.

Here’s a photo with a difference. This is me writing my daily blog on the bed of our hotel room in Prague. We were given the room, at Residence d’Oro, for free that night. As you can see, it was a very nice hotel and right in the middle of the old part of town, so we really appreciated the gesture (notice how shiny the floor was – you can see my reflection in it). A little later, Carmel and I headed out to enjoy the sights of Prague – one of the great cities of the world. 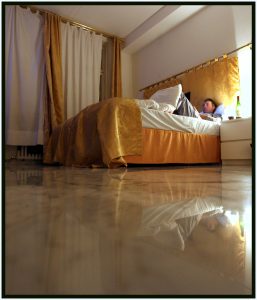