Yesterday I decided to throw a bit of speed into my run. Nothing serious though. I just ran a faster 1 km in 4:01, and followed it up with 200 metres in 39 secs. My lungs did it very easily, but my legs felt awkward. That’s because, due to so little running over the previous two months, my leg muscles have atrophied to some degree. It won’t take me too long, however, to get back to normal.

I’m often asked, “what’s next?” I don’t have anything on the near horizon running-wise. I do have the Tour de Bois late next month, but that’s cycling. My next running focus will be the King Island Imperial next March, and that’s still six months away. I’m not sure about the Big Red Run next June at this point. That’s a much bigger commitment and is something I won’t be able to decide upon until next year.

In the meantime, I do intend to be a lot fitter over the summer than I was last year. Unfortunately, I took my eye off the ball last year and found myself out of running form. This year I’ll be more conscious of that possibility.

This is another photo from just south of Kaikoura on the South Island of NZ during my world run. This was  great place to run, as the road wound along the coastline, often just metres from the water. There were even short tunnels to run through. And it was an unusually flat road, considering the hilliness of the nearby terrain. 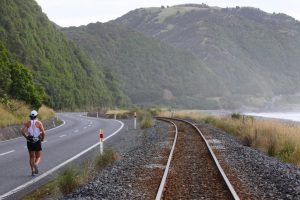